The other week some friends of mine came to town. Their visit was quite exciting for a number of reasons, mainly relating to good company, alcohol and pies, and the hotel in which they stayed.

But mostly the hotel.

Because they were in the Murder Room.

I found my friends’ room at the end of a long corridor. I thought I’d got the wrong floor at first, or they’d told me the wrong room, because as I approached the end, reading off the numbers as I went, I rapidly ran out of corridor. There was only one door left, and it was a fire exit. I wondered if their room was actually the stairwell, and how comfortable it could possibly be to sleep on a diagonal steppy slope.

But as I reached the fire exit and was about to politely knock, I noticed a small alcove to my right. And in the alcove was the door to their room.

I looked back along the corridor. The room was quite far removed from those of other guests, and hidden from sight. What if someone – a murderer, say – came into the hotel, and arrived on the floor via the fire escape? Said murderer could get into their room and do some murdering! Nobody would know!

But I put my concerns aside and knocked on the door. My friends let me in, and at first I was pleased to discover it was just normal room on the inside.

But then I realised it was designed for murder.

I only realised this after about 5 minutes, when I went to the window to check out their lovely view of different types of concrete. Because in the very corner of the room there was a comfortable-looking chair I hadn’t noticed before.

Why hadn’t I noticed it?

Because it was hidden from the rest of the room by the desk that had the information guides on it, the phone and remote controls, and complimentary tea and coffee facilities. But mainly, it was hidden by the big TV.

Someone could sit in that chair – a murderer, say – with a pistol and a glass of scotch (say), and they would be completely unnoticed by the occupants.

I sat in the chair, and imagined mself with a pistol and a glass of scotch. I was invisible from the door, and mostly invisible from the bed. And this was in daylight! What if it was night-time? I could murder my friends, and escape through the fire exit, and nobody would know!

Even my friends wouldn’t know!

Well, except for the fact that they’d just let me in, and had seen me disappear into the murder chair.

But if they hadn’t, I could totally have murdered them.

Except I didn’t have any scotch.

But apart from all that, there was absolutely nothing stopping me!

So I had to make a serious effort not to murder my friends then and there. Instead I got out of the murder chair and warned them of the terrible danger they were in. I think they appreciated that, and they assured me they would check that no murderers were sitting behind the TV with pistols or glasses of scotch when they got back to the room that evening.

Then we went out and had pies and alcohol.

The next day we met up again for a late lunch, and I was pleased to discover that my friends were both alive and unmurdered, and I like to think my warnings played a small but very important part in that. 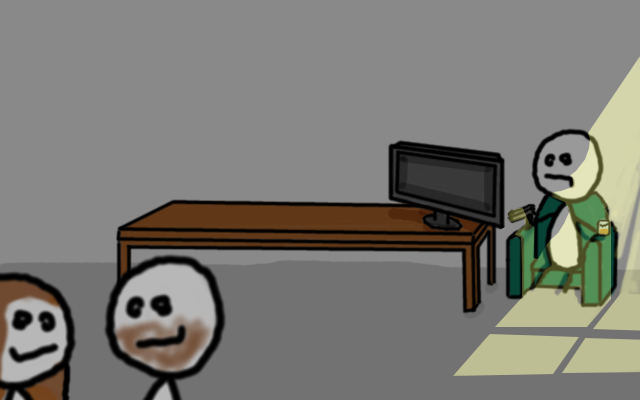