Multitasking isn’t generally one of my strong points, but what I do quite well is eat. I can combine eating with other tasks in a manner which makes me look exceedingly skilful.

I can cross the road, eating noodles with a drunken hunger only the drunk and hungry will ever know, without getting hit by bicycles.

I can eat while on the toilet – although it always feels futile.

I can even eat while brushing my teeth. Although it only works if I’m eating toothpaste. 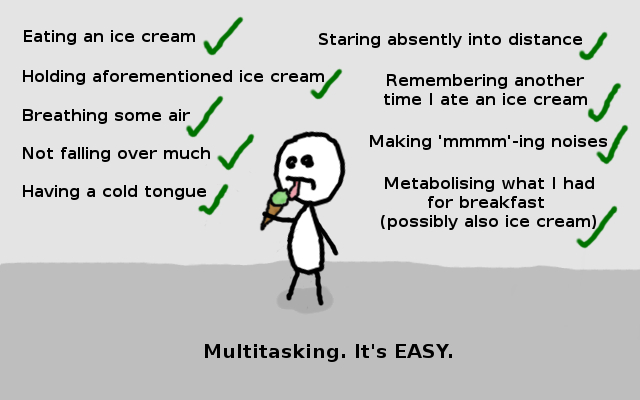 Yesterday I exercised my multitasking abilities by eating a plate of pizza while simultaneously working on my laptop, the recently reformatted Lappy II.

When I say I was working, I mean I was nearly-working. Technically, I was procrastinating. There was a boss-shooter flash game involved, and I was progressing quite nicely through the levels until the point at which I thought my laptop had acquired a virus.

I thought this because the right-click context menu appeared on my screen suddenly, and wouldn’t go away.

This was quite annoying. Eventually I realised I could get rid of it by hitting ESC so I could carry on with my ‘work’, but it appeared again.

This was quite troubling, because my laptop is my only means of procrastination, and also it’s the only thing I have to write on. The last thing I wanted was a virus to incapacitate it.

I tried refreshing the page, and this seemed to work for a while. But then the context menu popped up again. It was like some invisible muse right-clicking to annoy me, or maybe persuade me to get back to work. It became a battle between my tapping of the ESC key, and  this phantom force right-clicking.

So I quit Firefox and restarted, because that seemed like a sensible thing to do. But just before the window could reopen, the context menu appear on the document I had open in the background!

I started to panic.

The problem wasn’t just confined to my procrastination on Firefox – it had spread to my actual work too!

This was a worst-case scenario-scenario of the worst case. I couldn’t afford a Lappy III. I set my plate of pizza aside, preparing to unleash an arsenal of virus scans and anti-malware tools at the problem, to back up all my work, restart; anything and everything to stop the phantom clicker…

This was very odd, I thought.

I frowned at the screen, willing it to give me answers.

I made hmm-ing noises and pulled my thinking face.

I still couldn’t figure it out.

I was still hungry, so I retrieved my plate of pizza and set it back on my lap.

And at that point the context menu popped up on the screen again.

And that’s how I discovered that my lap isn’t actually big enough for a plate and a laptop at the same time. 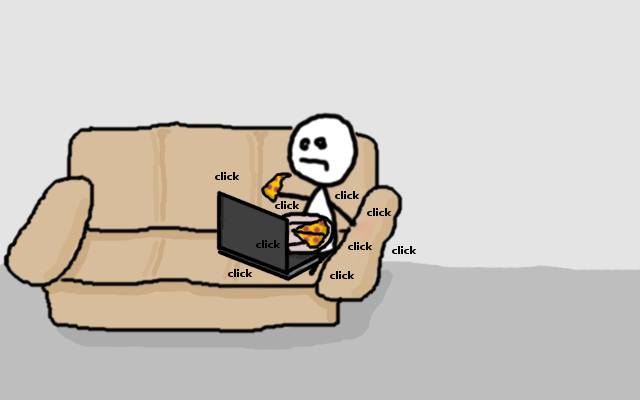