The other day I made pea and mint soup. This involves lots of heavy cans of peas which have to be carried an inordinately long distance to my kitchen, twigs from a mint tree or bush or whatever, an onion, and a bunch of other stuff I found in my cupboards – stock cubes, herbs, spices, dust, lint and so on.

Making soup is one of the more boring things one can do with the above ingredients, so I put on some hard-rockin’ tunes to entertain me while I cooked – which, in hindsight, was an error.

You see, soup doesn’t make itself. You can’t just chuck vegetation in a pot, apply fire and water in a manner in which their effects don’t counteract, and expect soup to form. At some point you – the culinary artiste – have to get involved. You have to blend the soup, to turn it from a bunch of floating and/or sinking stuff, into something that somehow looks even more disgusting when served with warm crusty bread.

So I went to the cupboard, moved aside the foot-long purple thing that buzzes when used, and got my blender – which also happens to be about a foot long, purple, and buzzes when used. It has an end with a power cable, an end where I’ll never put my fingers again, and is pretty good at turning non-mushy things into mushy things.

Soup has been around for a long time – tens of thousands of years – but I’m pretty sure our ancient soup-eating ancestors didn’t have blenders. They probably used sticks instead, and just hit the soup until it was smooth and thick and creamy. They probably used the same stick as a microphone and a guitar too – because that’s what I used my blender for.

As soon as it was in my hands I forgot about the soup. After all, there was music; I was on the stage of my kitchen, wearing my hard-rock underwear, and I had an adoring audience of simmering vegetables. It was my duty – nay, my calling – to perform.

I won’t recount all the details of the show – I couldn’t do it justice with mere words. You had to be there, man. Safe to say my singing was pretty mind-blowing – I’m pretty sure a couple of the peas in the front row fainted. A couple of them threw their shells up on stage with me. Mint leaves crowd-surfed over the peas’ heads; security escorted a couple of over-excited pieces of onion from the arena, and there were at least three asthma attacks.

And, of course, I couldn’t leave without an encore. The next tune was a distortion-laden, riff-heavy beast of a track, so I stopped using the blender as a microphone when I realised I could hold it horizontally, cradle it like a guitar, assume a wide-legged stance and bang my head up and down while hitting the on button furiously in time with the music.

The neighbours joined in about mid-way through the song, adding percussion, which was pretty nice of them. To be honest the blender was only capable of a single note, so it added to the tunefulness not-inconsiderably.

Towards the end of the song there was a key change, a rise in the pitch and intensity of my playing. I also noticed a smell. It was kind of like burning plastic, or hot metal, or both. It was a pretty rock-n-roll smell. Maybe some of my fans were burning litter in the arena, I thought – failing to consider the possibility that the motor on a blender might not appreciate being used as a guitar for the duration of a six-minute song.

So, when it was all over, I bid the crowd good night, went back stage, did a couple of lines of coriander, convinced a couple of young peas to make out, slept with them both, then went back to my soup.

But there was a problem. The blender wasn’t blending. I looked at the end where I’ll never put my fingers again and discovered that the blades were refusing to spin. The blender made a credible guitar-type noise when I hit the button, but that’s all. It was useless. I should have smashed it onstage at the end of my song.

So I went out and found a stick and tried to blend my soup the old-fashioned way, by hitting it like we probably did thousands of years before the invention of blenders. I spent ages on it, but it didn’t really work. The secrets of pre-blender soup-eating civilisation had been lost to time, and that evening I found myself choking down lumpy, horrible soup, remembering my faded glory days of sell-out kitchen tours and wondering where it all went wrong.

And to top it all off, I think one of my backstage guests had herpeas. 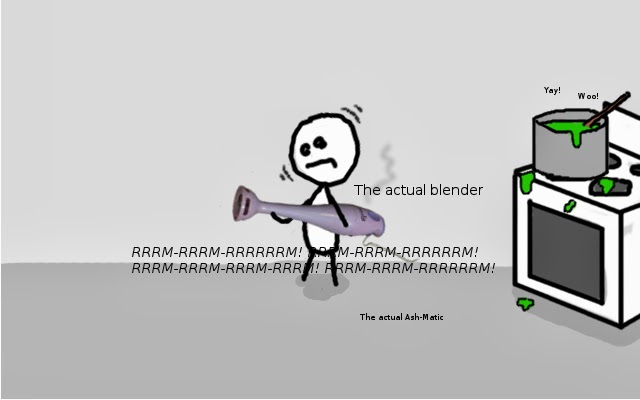