*Warning. This post may include death.*
*May. I said may.*

The other day I was behind the counter in the cafe where I work, doing important things involving spoons. I find that most things that involve spoons are important, but I was being paid to do these particular things, which made them more important than usual.

It was a slow morning, after the morning coffee rush and before the first customers would come in for lunch. In fact there was only one customer, a regular, ensconced at a small table by the wall, reading a paper, drinking his americano and eating a piece of cake.

I had my back to this gentleman, because of my aforementioned engagement with the spoons. Soft cafe-type music tinkled out of the speakers overhead – but neither that, nor the clinky song of the spoons was enough to hide the noise.

Yep. The noise. My customer made a noise.

What kind of noise? – I hear you ask.

Well, that’s a very good question. That’s also the question I asked myself.

I didn’t know what to do.

Imagine you’re sitting in a cafe, relaxing with a coffee and a bite to eat. Mmm. Tasty cake. You let out a little burp of satisfaction, as one is wont to do in such a tasty situation.

Now imagine that the beardy guy behind the counter, the one who has been pretending to polish spoons for the last ten minutes, turns around to stare at you.

That would be pretty embarrassing, right? Nobody wants to be called out on their burps. You’d be offended. You’d get defensive. You’d be all, ‘Bitch get your eyes off me! Can’t a motherfucker burp in peace? Get back to your spoons, bitch!’

So I didn’t want to turn around.

But on the other hand – the dude might be choking.

What to do… what to do…
I polished another spoon while I thought about it.

No more noises came from behind me, and I wondered if the guy might be dead.

Well… then it would be too late. But what if he was only nearly dead, and a prompt intervention by a bearded guy who had once seen the Heimlich maneuver on a sitcom might save his life? I figured I should probably turn and check on him.

But on the other hand – the dude might just have burped.

What to do… what to do…
I lifted up a few spoons and put them down again.

What I needed was a reason to turn around. A pretext, a seemingly-genuine reason for a guy behind a counter in a cafe to face the other direction.

Maybe there was something behind me I needed to get? I thought about what was behind me. There was actually quite a lot of stuff – cloths, sponges, towels, different species of cutlery. I could just turn to get something.

Or, I could just take a spoon – like the one right by my hand – and turn around to give it a quick rinse. That was actually a natural part of the messing-around-with-spoons process. It would look natural, and so seemed like a good plan too.

But then I had a better idea. I was polishing spoons to shiny reflectivity… I could just hold up a spoon and look at the reflection to see whether the guy was dead or enjoying cake – like a spy might do, if that spy had lost his spying job and got a job in a cafe instead, and was worried that a customer might not be enjoying his cake.

I lowered the spoon, terrified I would be confronted with the sight of the guy face down in his half-eaten cake.

But he wasn’t. He was okay. He was sitting in his seat, holding his coffee cup, looking right back at me.

Our gazes met for a long second.

Then he burped and turned back to his newspaper. 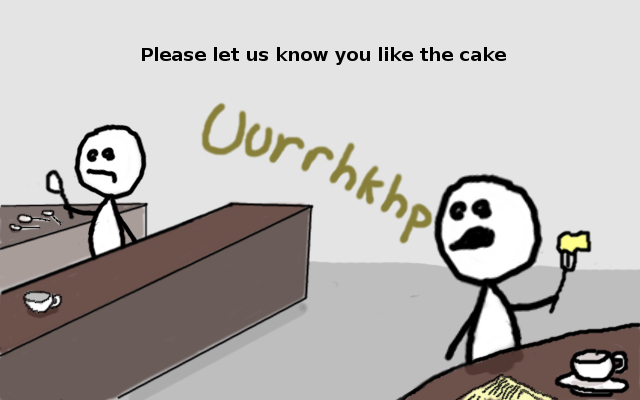