A couple of doors down from me lives a pizza beast.

The pizza beast lives exactly where you might expect a pizza beast to live – in a pizza shop.

Yep. We keep a wary eye on each other.

I feel the pizza beast watching me as I pass by on my way to work, into town, or – more commonly – when I come back home.

Whenever I have to pass the pizza shop, the beast reaches out for me. It uncoils from its lair, extends its long, cheesy-scented, pepperoni-suckered tentacles, and tries to ensnare me – while I do my best not to be caught.

It’s become a perverse kind of game between us. The pizza beast tries to get me, to drag me into its lair, to mug me for a portion of my hard-earned wages, and impregnate me with pizza – while I try to escape its clutches, make it home safely and eat a piece of toast instead.

Unfortunately, I don’t always escape the pizza beast. Sometimes I find myself on the sofa, with a baby pizza beast on my lap, extending its nebulous scented tentacles through my flat, and wondering how I got there, and why my belly is larger than I want it.

Since I moved to the area, the pizza beast has got me a few times. Mostly on the weekend, when my guard is down. I’m starting to worry that a baby pizza-beast is growing inside me – that would be pretty bad, as I don’t want my flat to turn into a pizza shop, and I hate dealing with customers.

But I came up with a plan this morning – a sure-fire way to ensure the pizza beast doesn’t win:

I went into town, a few minutes ago. I walked the long way round, so I didn’t have to pass the pizza beast’s lair, and I bought a jar of black olives.

Now, I hate black olives. They spoil whatever they come into contact with. A salad with black olives in it is just a big pile of pointlessness, with extra nasty on top. A jar of black olives is just an empty jar going to waste.

And I’d rather not have a pizza at all, than have a pizza polluted with those little black balls of salty cack.

On my way back home, I took the short route – the route past the lair of the pizza beast. When I got close enough to be in danger, I opened the jar, extracted two olives, and shoved them up my nose.

That’s right. I shoved them up my nose.

I walked past the pizza shop with a big grin. I even stuck my head inside and waved heartily at its human minions scurrying around within.

I wasn’t even tempted to have pizza.

Now I’m back home, and, even though the olives are stuck, I feel like I’ve won. 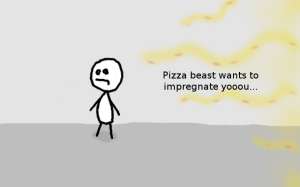