I currently have no job. This is great. I fill my days with activities of a satisfyingly horizontal nature, trying not to leave the TV on a channel which might show Jeremy Kyle reruns, and working on my latest super-secret project. Life is good. Extremely frugal, but good.

I wasn’t fired from my last job – the one I hated – which is a shame because I’ve never been fired, and I think it might be quite fun… I think it would be like being in a movie where someone gets fired, and being the one who gets fired in it.

Nor did I quit in a spectacular fashion – like riding a water-cooler around the office telling everyone to fuck off, then spending the next five minutes deliberately pushing at the pull door – which sounds like even more fun. Instead I gave a month’s notice, worked it out responsibly, and left cordially – which wasn’t much fun at all.

So now I need a new job. But among the the long list of things I was never any good at – a list with the number one spot held by the word mornings– is job-hunting. I just can’t do it. I find nothing as soul-crushing as an application form. Not even a Jeremy Kyle rerun.

But I’m fortunate in that I have a super-secret project to use as a procrastinatory excuse.

The other week I was trying to source some black acetate-like material for this project, and was rapidly running out of ideas as to where I could get such material. As a last resort, I decided to visit a florist. I’d formerly used coloured cellophane of the type that bouquets of flowers are wrapped in, and my logic was that goths probably bought roses dipped in blood or skulls or glowsticks or something, and thus there would be market for black cellophane in the florist industry – which I could substitute for the acetate I wanted.

So off I went to a nearby florist. And it was there that I discovered what kind of job I really want.

I pushed open the door and stepped inside. An attractive blonde woman looked over at me from behind the counter. Instead of looking around at all her marvellous flower arrangements and giving her the unwarranted impression that I cared for her floral delights, I headed straight for her.

But, as I walked, I heard the unmistakable sound of a lady enjoying sexytimes.

No way! said my brain to itself. Her assistant is getting some in the back room!’

But I was half-way across the shop by then. I couldn’t exactly turn and flee. The woman behind the counter looked at me with a straight face, and I wondered if perhaps she couldn’t hear it. Maybe she was deaf.

I reached the counter, and we looked at each other as if nothing were amiss.

‘Um,’ I said – this is the manner in which I begin all my conversations.

‘I was wondering if you had any black cellophane in stock.’

‘Black cellophane…’ she mused – so at this point I knew she wasn’t deaf, and could almost certainly hear the sexytimes.

‘Yeah… Like a goth girl might use to wrap a floral token of her anguished love for death,’ I elaborated, gradually realising the noises were not coming from the door at the back of the shop – but from her computer monitor.

‘We’ve got all kinds of colours… but not black,’ she said. She glanced at her computer screen and clicked something…and the sexytime noises ended abruptly.

‘Um,’ I said – because this revelation was like the Mayan long count calendar spelling out the word BOOBIES when turned upside down – and definitely counted as a new conversation.

‘I don’t think we’ve ever had black in stock,’ she shrugged. ‘Sorry.’

‘Any idea where I might find some?’ I said, wondering if social convention dictated I should enquire whether she needed help arranging her flower or something.

‘Hmm. There’s another florist up past Tesco,’ she said. ‘They might have some. Do you know where that is?’

I turned to leave the shop.

‘Have a nice day,’ she added, hitting play again.

And that, my friends, is how I knew I wanted a job where I didn’t have to give a fuck. 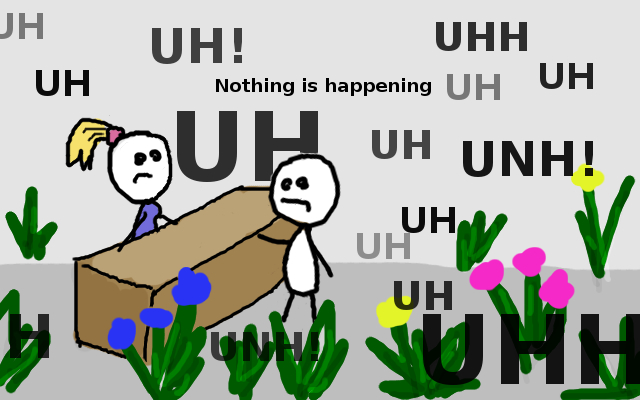