A Lack of Enthusiasm for Teleportation

Recently I went with some friends to a lovely country pub, to eat fish and chips on a Friday night, while the beautiful British summer howled against the window panes and soaked up the legs of my trousers.

They were some of the best fish and chips I’ve had. The fish was a giant slab of cod that clearly came from the body-building champion of the cod world. It was delightfully battered and tasty, and the chips were huge and chunky, salted and vinegared – the kind of chips seagulls have wet-dreams about, not those pathetic skinny things people (yes, Americans, I’m talking to you) call fries.

On the way home, I sat in the back of Miss-Matic’s tiny car, staring out of the window at the beautiful summer evening as it lashed the glass and flooded the road. I think someone was trying to engage me in conversation, but as so frequently happens when I have a window from which to stare, my mind was elsewhere.

I was listening to the chassis scrape the ground every time we went over a bump, weighed down by the combined bulks of five food-stuffed adults, impatient to get to a sofa where I could lie and hold my stomach and groan about how full it was. And I realised that instead of subjecting Miss-Matic’s poor little automatic with the torturous task of chauffeuring us about, a more efficient and elegant solution might present itself in the form of teleportation.

Such a technology would not only be a great benefit to mankind, solving all kinds of large-scale logistical problems – such as getting aid to disaster-struck countries, mining rare-earth metals from the asteroid or Kuiper belts, or unloading groceries from the car without making multiple trips – but a sufficiently idiot-proof system would also allow formerly designated drivers such as Miss-Matic the opportunity to drink and teleport without fear of crashing into someone else’s teleporter, teleporting into a tree at the side of the road, or ill-advisedly attempting to drag-race other teleporters.

Initially I resolved to forego groaning on the sofa while holding my belly, and instead to commence designing such a teleportation system as soon as we arrived home – but as I began to work out some of the technical challenges in my head, I also became aware of some of the potential dangers.

As a terrifying scenario played out in my mind, I came to realise that the project would be doomed from the very beginning.

With a completed teleportation device, Miss-Matic makes one last trip to the country pub with the nice fish and chips. She distracts the bar-staff with witty conversation and a large order of local beers, while I install the teleportation pod in one of the toilet cubicles, cleverly hidden with a fool-proof out-of-order sign. The other pod sits in a dusty corner of our flat.

The next time I want to go out on a beautiful summer evening for a giant plate of fish and chips, I just teleport home afterwards, thus avoiding the ravages of said evening – and allowing Miss-Matic to stay home and do whatever it is that seems to take up all her time on Facebook instead.

Now, I’m a smart guy. Not only do I know science and shit and have successfully built a working teleporter, but I learn from the mistakes of others. Before I dial home from the pub, I check every fucking inch of that teleporter for stowaway flies.

And then, in less than a minute, I’m home. I go straight to the sofa. Lay myself upon it next to Miss-Matic – who’s still on Facebook – hold my belly and groan and wish I hadn’t eaten so much.

Until the changes start.

At first, they seem beneficial. Over the coming days I get stronger and more powerful. My sexual stamina increases, and Miss-Matic is delighted.

But then my fingernails start to fall off. And one day, when we’re cooking, I get an overwhelming urge to jump into the frying pan.

Fearing something is terribly wrong, I go back and check the teleporter logs, and realise my mistake.

You see, dear reader, despite my precautions, I had inadvertently taken other genetic material into the teleportation pod with me. It wasn’t just Ash-Matic that teleported, but also the remains of the body-building champion of the cod world, and a plateful of chunky chips.

The teleporter was confused. It didn’t know what was me, and what was not. It fused us at the molecular-genetic level. My newfound strength is the strength of a body-building cod. My newfound sexual prowess is the stamina of a potato.

I’m turning into a human-fish-potato hybrid.

And then it gets worse. Miss-Matic realises she’s pregnant. She tells me of terrible dreams of giving birth to an aquatic Mr. Potato Head.

My fish-potato instincts begin to outweigh my human instincts. I cover myself with salt and vinegar and tartare sauce and run into restaurants, throwing myself onto the plates of the diners and screaming, ‘Eat me! Eat meee!’

Miss-Matic tries to get an abortion, but I kidnap her first and force her to prepare a magnificent feast with myself as the main course – but she shoves me into the teleportation pod at the last moment, sabotaging it with a filetting knife.

With a flash and a bang, I end up back in the pub where the whole nightmare began, fused with the the smoking remains of the other pod, as a badly written out-of-order sign floats slowly down onto my human-fish-potato hybrid corpse.

And so, my friends, when I arrived home that evening I went straight to the sofa and lay down, groaning and holding my stomach, while Miss-Matic checked her Facebook beside me, instead of designing and building a teleporter.

I no longer have any enthusiasm for teleportation, and make no apologies for it. 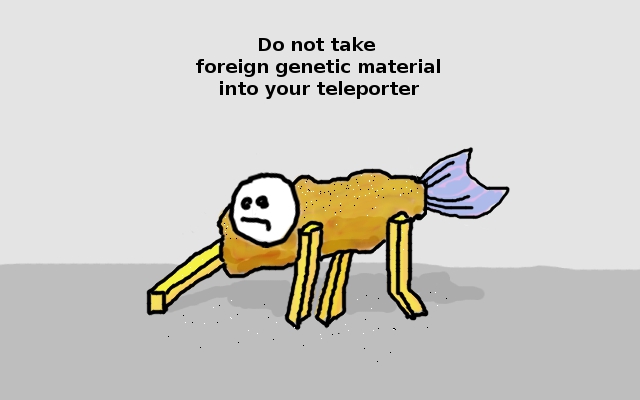