Imagine the worst weekend you can imagine. Now stab yourself in the eyeballs while imagining it. That’s almost how bad last weekend was – except the screaming noises coming out of your mouth are probably more pleasant than the dialogue of last weekend.

What made it worse was that it wasn’t the machinations of fate that made it so horrific – just the unholy union of boredom and masochism.

Miss-Matic and I did this to ourselves. I doubt the scars of our decisions will ever fully heal.

Interspersed between rounds of ‘I don’t know, what do you want to do?‘ we made suggestions, which were all greeted with an overwhelming lack of enthusiam.

Eventually, our inability to entertain ourselves led us down a road no person should ever tread. We decided that since we couldn’t be bothered to go out, stay in, cook, eat, sleep, or anything else, we’d have to think of something radically different.

And so we did.

We decided to do something simple, relaxing, and very, very unlike us. The premise was very simple: First we’d go out, buy enormous amounts of snack food and alcohol, then return and settle in for a weekend film-fest. But the twist was that we would pick movies that neither of us would ever watch under normal circumstances. Movies that were so unlike us – so far removed from our personal tastes and preferences – that the weekend could not help but be novel.

But what kind of movies? We’ve been known to watch all kinds of crap. We even watched part of an Adam Sandler movie once.

So we went online and loaded up a big list of movies, and tried to spot those that wouldn’t normally catch our eyes. The kind that would make us cringe. The kind that our self-preservation mechanisms would auto-reject. Those were the ones we were looking for.

And thus we became aquainted with the Twilight saga.

Now, I know Twilight came out in 2008, and Twilight-bashing is so 2008, and everybody has already seen it and hated it and made all the jokes and all of that – we weren’t stupid enough to get curious about the Twilight phenomena back then – but did you know that THEY CARRIED ON MAKING TWILIGHT MOVIES?

It’s true. I’m serious. Look it up. Wikipedia will back me on this.

If ever there was evidence to support dystheism, it must be this. What other kind of deity would allow this kind of suffering?

Do you know how many hours of blah blah Edward blah Jacob blah blah blah Bella blah we had to sit through last weekend?

There was one good bit in the first film – Miss-Matic had escaped to the bathroom, and different coloured bubbles started filling the screen, and it was all quite pretty, until she came back and wiggled the mouse and pressed Play and blah blah blah blah blah.

At some point in the second film I had to afix a cushion to Miss-Matic’s head, because she was headbutting the walls every time Edward opened his mouth to say blah blah blah blah blah – where ‘blah’ is any disturbingly creepy flavour of cheese, because that’s all he knows how to say.

In the third film, things picked up a bit, but then the power came back on and there were a bunch of werewolves and vampires flailing at each other in a boring manner and saying blah blah blah.

And the fourth film – seriously, what the fuck? I thought I knew what boring was. I’ve been bored before. I’ve watched boring things. I’ve watched shadows and the hour-hands of clocks move; been stuck in an airport for days at a time waiting for news of a rescheduled flight; sat through an entire software engineering lecture – but I have never witnessed anything as boring as that fourth movie. At one point I turned to Miss-Matic and said, ‘Is it me, or has nothing happened yet?’

But it wasn’t me. Nothing had happened.
And a few hours later she, in turn, turned to me and said, ‘Is it… is it still on?’

So I checked the laptop, wiggled the mouse, watched the seconds counting up on the video, and confirmed that yes, it was still on. It was just that nothing had happened. They were still just whining at each other.

I’d like to end this on a positive note – I really would.

I’d like to be able to say, ‘But eventually, it was over. Miss-Matic and I had survived. We bandaged the sites of our attempted suicides, cleaned the blood off the walls. We picked up the empty beer cans and bottles of wine, threw out the bones of the small animals we’d had to catch for sustenance, tidied the room, and went out into the sunshine – safe and secure in the knowledge that we would never again be so reckless with our lives and minds.‘

But I can’t. Because it’s not over. Every time I close my eyes, all I can hear is blah blah blah blah blah. We still live in a world where Twilight exists. What happens if someone sneaks a Twilight DVD into the disc-drive when I’m not looking? What if I’m in an electronic goods store, and some sadistic employee starts playing a Twilight movie on the televisions? What if I make a new friend and visit their house and they’re making me coffee and I’m looking forward to the coffee and they bring it out and they give me the mug – and there’s Edward and fucking Bella on the side of it??

It’s not over. I’m afraid it’ll never be over.

I want to die, but I’m too terrified that my life will flash before my eyes, and I’ll have to watch those fucking movies all over again.

And to make it all worse, there’s another one coming out later this year. 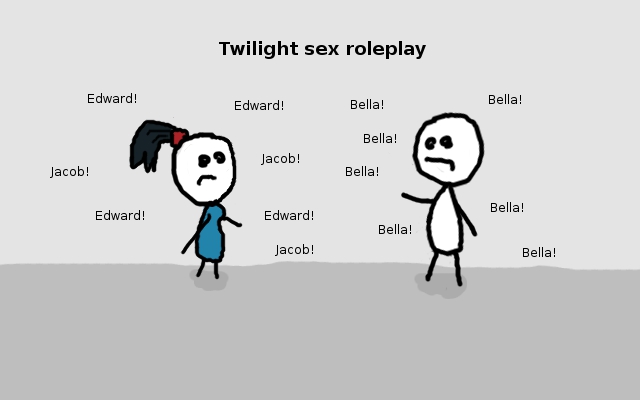