Ash-Matic Does Affection for Animals

Just like most people, I am asked on an almost-daily basis what my favourite animal is. The only questions I am asked with greater frequency are, ‘What made you think that was a good idea?‘, and variants of ‘Did you take my X?‘ – for which I have a selection of stock answers.

The problem with this question is that I have so many favourite animals – and this is because there are so many good ones.

But some people aren’t happy with this narrowing of the question. Some people live in a binary black-and-white world where there are favourite things, and then everything else. These people would insist that I must have one favourite animal amongst all others, and demand that I choose.

Usually when this happens they place a selection of my favourite creatures before a firing squad, and force me choose one to spare while they look pleadingly at me with big, wet, pick-me-pick-me eyes – which is quite wasteful, and I don’t think very fair.

In a world of cool animals, how does one choose one’s favourite?

If animals were monsters, my favourite would be the one that could beat all the others in a fight. Godzilla is therefore my favourite monster, and the animal equivalent would probably be some sort of giant mongoose with radioactive-breath and a grudge against Tokyo. If animals were songs, my favourite would be the one I could listen to over and over without getting bored – which might make it a cat, purring in my arms, and dribbling such quantities of catnip-induced saliva it would put the queen from Aliens to shame. And if animals were different brands of peanut butter, then they could just fuck off.

But animals aren’t these things. Animals are animals.

I don’t know why, but I like animals. A lot. And not just the tasty ones.

I never look at a baby human and want to steal it. I like to think this makes me a man of good character, and safe to be around, should you happen to be a baby human. But show me a baby polar bear, and before you know it I’ll be halfway down the street with it tucked under my T-shirt, making squuueeee-ing noises.

I don’t approach strange human adults with the intent of feeding and befriending them. Okay, fine, maybe when I’m drunk. But generally I don’t like people. I don’t want to talk to you. I don’t want to hear your opinions. I don’t want your wet nose on my face. But show me a bull moose, and before you know it I’ll be halfway down the street, riding on its back as I try to get my T-shirt over its antlers, making squuueeee-ing noises.

And I don’t have deranged escapist fantasies where I run off into a metropolitan area and build a life amongst humans, doing the things humans do, eating the things humans eat, and curling up with other humans when I go to sleep at night. What kind of fucked-up fantasy is that? But I have that fantasy about all sorts of animals. Even porcupines.

But the truth is, those animals wouldn’t care.

So I could go back to work; have another drink; open a fresh pack of batteries. Or I could grow up and admit that I’m just jealous of the creatures that share our planet.

And then I could take off my clothes. Run for the door.

Run out under the wide, empty, skies.

You could meet me there.

You could meet me under the trees.

You can film me rolling in my poo and trying to sniff my bits. And then you could get a chainsaw and cut down my habitat, and I could get hit by a car while trying to escape across a busy road – just as nature intended.

Then you could take me to a vet, who fixes me up, neuters me, and sends me to live out my life in a grassy enclosure under the miserable British sky – while ugly primates draped in fabric come and stare at me, and point at me, and offer me peanut butter sandwiches, and hoist their ugly little primate offspring onto their shoulders so they can stare and point from even greater altitudes – day after day after day.

And maybe – just maybe – one of those ugly little primates will add me to their list of favourite animals too.

But fuck those primates.

They don’t even know I don’t like peanut butter. 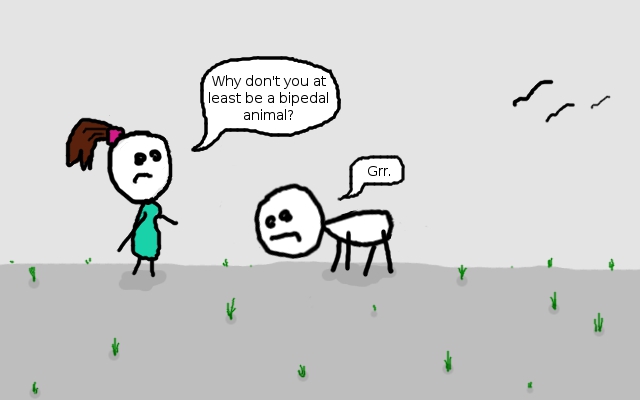