Ash-Matic Does a DVD Film Review

Last night I watched a 2010 film called Buried. This is a Ryan Reynolds vehicle, only one without wheels. It’s more like a box, with Ryan Reynolds in it.

I once took a course on short-film production. In that course, it was suggested that the way to make a short film is to use as few actors as possible, and as few set-pieces. The powerhouses of creative vision behind Buried clearly decided to take this idea to its extreme. There’s one actor – Mr Reynolds, and one set-piece – him, in a box.

The plot is simple. Reynolds plays Paul Conroy, a civilian truck driver in Iraq, whose convoy has been ambushed. He wakes up to discover that he’s been buried alive, and we get to join him for an hour-and-a-half of being a man in a box

Some films are just beautiful, with stunning use of colour, metaphors in the shots themselves, sweeping vistas of the natural world, or imagination-vomit from the art-department. This film is only beautiful if you like the inside of boxes. When the film feels we’re a bit bored of watching Ryan Reynolds grunting in a box, lit by the miraculous non-oxygen-consuming flame of a Zippo, we get to watch Ryan Reynolds in a box lit by the screen of a phone, or by glowsticks thoughtfully provided by his kidnapper.

The phone allows Conroy to call out for help, so although there are no other actors on-screen, we get to share his frustration, fear and desperation as he tries to communicate his situation with the outside world. That outside world is terrifying, filled with dark motivations that Conroy suspects, sees, but can’t truly believe. His world shrinks around him to the box itself, a tiny microcosm with a geography that we get to know as we watch, while the unseen world becomes alien and disturbing.

Buried is a stupid film. It’s Ryan Reynolds in a box. How could it not be stupid? It has a bunch of plot holes and a few mis-steps of science, and I saw the ending coming before I’d even heard of the movie.

But it’s good. I was gripped. My world became Conroy’s box for the duration. Reynolds plays the part convincingly, and deserves a desert-full of credit pouring onto his head like sand through the planks of his career. This is a man carrying a 90-minute film about a man in a box, on his own – which I personally find impressive.

If you like thrillers, but aren’t too demanding about watching people running around in urban environments, shooting at stuff, trying to solve crimes and shit, then Buried may be for you. It’s tense, claustrophobic, stupid, and good.

I’m not sure how I missed it when it first came out, but I’m glad I took the time to track it down.

It also gave me a great idea for a sequel, in which Ryan Reynolds is kidnapped and buried in a box, and we get to listen to him telling us it’s no longer funny for ninety-minutes. 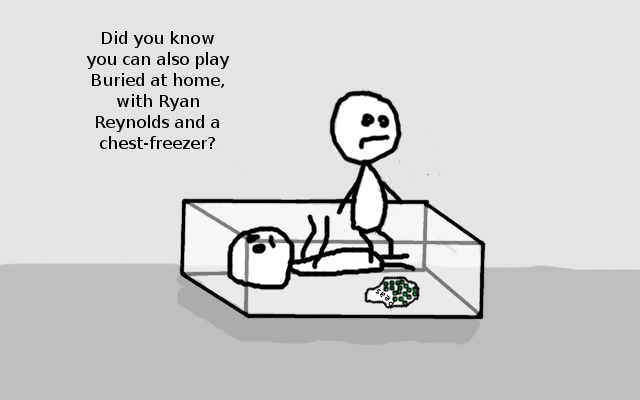