The Most Annoying Egg in the World

[contains language – because it was that annoying]

Fortunately I had a carton of eggs blessed with the kind of longevity that keeps people like me from starving.

I always fuck the eggs up, but I’m pretty good with the sandwich. On balance it generally works.

But yesterday I had the Most Annoying Egg in the World.

Naturally this egg was the first one I picked from the carton of 15 eggs. What are the chances?

(Hint: one in fifteen)

I turned the gas on, made the gas go on fire, put the pan on the firey gas, and forgot to put oil in the pan.

When it was a bit hot I cracked the egg on the side of the pan, and a bit of eggshell fell into the pan.

So I took the pan to the sink and tipped the bit of eggshell out (admittedly it took me a while, but I’ve learned not to use my fingers for this type of thing), then put the pan back on the flame.

Then I re-cracked the egg on the side of the pan, with a bit more force.

Two bits of shell fell into the pan.

By now the egg must be sufficiently cracked to break, I thought.

So I tried to break the egg in half with my fingers.

Three bits of shell fell into the pan.

I emptied the fragments of shell into the sink and put the pan back on the flame. I tried again.

But the egg wouldn’t fucking break. The shell was broken and disintegrating, but there was a mysterious barrier within that prevented the yolk from escaping.

Google might have known what it was, but my priority was to eat a lovely fried egg sandwich, not Google annoying egg anatomy.

I tried to pierce this mysterious film with my nail, but succeeded only in causing yet more bits of eggshell to fall into the pan.

‘Fuck, fuck, fucking fuck,’ I said, and tipped the shell into the sink.

There was virtually no shell left by this point, just a squishy wibbly sac containing the inside of an egg. So I tried to puncture it again, and more motherfucking fucking eggshell fell into the fucking pan.

So I threw the Most Annoying Egg in the World out and got another egg from the carton, and proceeded to make a fried egg sandwich without any trouble at all. I didn’t even break the yolk.

The problem was, I’d been outwitted by a fucking egg, and the sandwich tasted like it too. 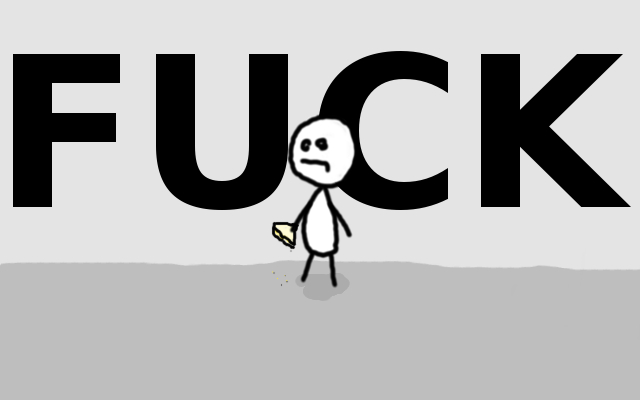