You know those TV shows where contestants have to make their way along an assault course, negotiating a series of obstacles and traps to reach the end and win a prize?

That’s what I’ve been doing recently!

It’s brought a sense of danger and excitement to my life. Every day I get a pump of adrenaline at the thought of the risk and hazards I face as I set out to win.

Most days, instead of a safety helmet I wear a black woollen cap, because it’s winter and I reckon I look cool in it. And usually, instead of cameras watching, there are other pedestrians to witness me hop and jump and take great leaps of faith. There is usually a prize at the end – yesterday it was two pocketfuls of Cadbury Creme Eggs, which is the best kind of prize if you like things that are one hundred thousand percent sugar and like dicing with diabetes. Like I do.

But the most important parts of any obstacle course are the obstacles, and there are always plenty of those, because of the producers.

The producers are very productive on this particular course. They produce regularly, every day. They mostly come out at night, mostly, or early in the morning when nobody is around. And they produce obstacles, all over the course.

Every day I run this obstacle course. Some parts require a fine sense of balance – I have to weave a precise route between obstacles, with my arms out to either side so I don’t wobble and accidentally step on one. Not all contestants are so lucky – I regularly see obstacles smeared and scraped along the course, sometimes complete with the imprint of some unlucky soul’s shoe. Sometimes I even see obstacles with bicycle tracks through the middle.

Other times there just isn’t a safe route through the obstacles, so I have to jump. This is quite risky, as the reward for failure is direct contact with one of the obstacles, and nobody wants that.

Recently I’ve been spicing things up by taking alternative routes down the course. This involves leaving the conventional route and walking where the producers don’t tend to go. The problem with this route is that there are other hazards there, in the form of big metal things travelling at high velocity.

But let’s face it, getting hit by a car isn’t quite as bad as stepping in poo. I mean, obstacles.

It’s tempting to blame the producers for the difficulty of the course. I mean, does there really need to be that many obstacles? But the producers aren’t really at fault. They just produce where they are directed to produce. It’s the directors who are guilty. They don’t seem to care that this is a densely-populated urban area, and that there are a lot of contestants who aren’t as agile as me.

And while we all relish a little excitement in our lives, and an obstacle course is always a fun way to pass the time getting from A to B and winning a prize, sometimes it’s also nice to walk without fear of getting obstacles stuck in the treads of your shoes and walking them all over your home.

So please, if you’re a director who takes their producer for a walk around your local obstacle course and your producer stops to be productive, please pick up after it. 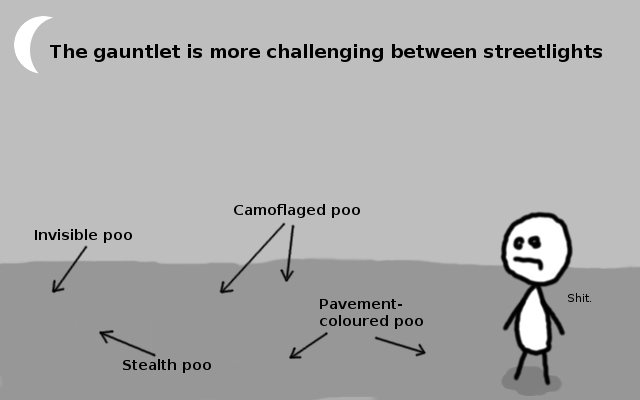