In Need of a Jack

I noticed something odd when I looked in my bathroom mirror this morning. Somewhat disturbingly, the odd thing seemed to be part of my face. But it did provide the answer to a mystery that has bothered me all week.

It began a few days ago. I thought I was alone in my flat one morning, but then I heard a noise in the bedroom. I went to investigate, fully prepared to tackle a mouse, a cat, or a burglar – or shriek and flee if it proved to be a particularly noisy spider – but what I wasn’t prepared for was a very small giant.

Yep. There was a giant in my flat. A very small one.

After a moment of bewilderment I did what anybody would in such a situation – chased it out with a broom – but it’s presence did concern me a little, especially when, later that night, I encountered a second giant.

This one was even bigger than the first giant (but still very small), and was carrying a sheep under its arm. Again I got my broom and chased it out, but I started to worry.

Over the next few days I encountered three more giants. I kept all the doors and windows closed, so it was a mystery how they were getting in.

Until this morning, when I looked in the mirror.

Time for a little back-story. Ever since I was young I have had two patches of spare hair above my eyes, which I like to call my ‘eyebrows’ because Academy Award-winning actor Matt Damon also has a pair and this is what he calls them. For the most part these ‘eyebrows’ keep a low profile – except when I have a strong emotion to register, or I want to make a subtle point without the use of my hands, mouth, pen, paper, placard or internet connection.

But on this particular day, the profile of my right eyebrow was anything but low.

Sometime I like to run my fingertips through my eyebrows, from the edges inwards, against the grain, and imagine that my fingers are running through a wild meadow, holding their hands out and brushing the tops of the grass and making noises like planes might do if planes were fingers and fingers had mouths.

But on this occasion, while running and gambolling through the meadow of eyebrow hair, my right-hand forefinger ran not into a bush or a thicket, a stand of bamboo or a tree, but into a fucking beanstalk of a hair – and thus solved the mystery of the giants in my flat.

This thing was clearly magical in origin. I swear it hadn’t been there at the start of the week. Even as I watched there were very small giants climbing down it from the fairytale kingdom at the top. Never before had I seen such a huge, out-of-place bristle in an unassuming patch of hair.

I searched the cabinet for my tweezers, but one of the giants had carried them off. I found tiny cuticle scissors and considered cutting the beanstalk down, but even encountering its stump in the fuzz of my eyebrow would be like encountering a dishwasher on a pool table – and besides, I only had one pair of scissors and in the battle between stainless steel implement and mutant follicle-spawn, my money would not have been on the scissors.

The giants were getting out of hand at this point, so I had to act fast. I went to my DIY box, which is full of cheap tools that have each been used precisely once, got a pair of big-ass pliars and wrenched the beanstalk right out of my head.

A great wail of despair arose as all the giants in my flat realised they had no way to get back to their kingdom, and I proceeded to chase them all out with my broom. I’m not cruel though – I did direct them to a nearby barber’s where they might find similarly-aflicted individuals upon whose brows they might locate alternative routes home.

Then I went back tothe mirror and resumed running my normal fingers through my normal eyebrows, and to look at me you would never believe I had very tiny giants in my flat this week. 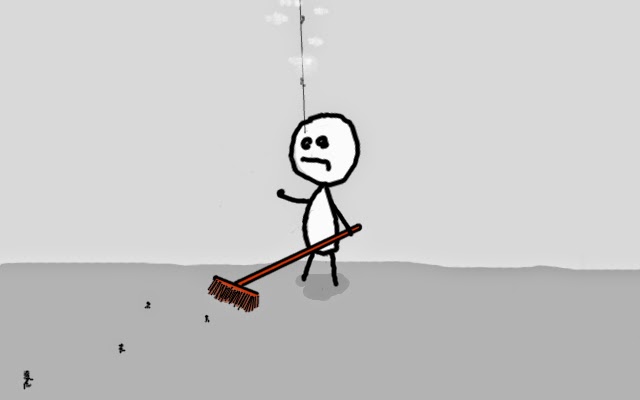