The Great McDonald’s Expedition of 2013

I’ve just returned from a lovely week in the lovely France, where the lovely Miss-Matic and I attended the lovely wedding of a lovely French couple, who were, quite frankly, lovely.

While we were there we did a number of touristy things, ate at number of cafes and restaurants, and stayed at a number of hotels, like tourists tend to do. But this particular tale begins with our arrival in a small village somewhere south of Lyon.

Miss-Matic and I disembarked the train and walked the mile or so to our hotel. It turned out to be a cross between a low-budget located-on-a-roundabout-near-an-industrial-estate type chain hotel, of the kind you might see in a British film, or a British TV show – or in Britain – and a cheap motel such as you might see in an American movie, or an American TV show. Or, indeed, in America. The result was the type of accomodation you might expect to find in a joint British-American film production, or TV show, or in whatever province might have resulted if the colony hadn’t gone off in a huff, demanding independence like a stroppy teenager with bad hair and an obsession with ‘freedom’.

Except it was in France.

Anyway. We arrived a good half-hour after the alleged check-in time, only to be informed that the lady who ran the place (who I will refer to here as ‘Hotel-Lady’) was off doing important French things, and wouldn’t be back for a couple of hours. So we sat about in the sun for a bit, feet up on our luggage, unaware that this level of organisation might be a sign of things to come.

Eventually we got our room, and soon our friend (who may or may not be called ‘Liz’, but who I will refer to here as ‘Liz’, because that’s her name) showed up. That night, the three of us dined at the hotel’s restaurant, choosing from a short menu made shorter by the fact that most things on it – as we were informed by Hotel-Lady – didn’t exist. Fortunately, there was wine, which was good, because I like wine.

The next day – the day of the wedding – we spent little time in the hotel. The weather was blazing hot, and a good time was had by all. We rolled in at stupid o’clock in the morning, emitting alcohol fumes in the kind of quantities that might justify the evacuation of a small town if we derailed there.

We rose late the next day, and shortly after we emerged the heatwave broke.

The sky clouded over; the rain came down. Thunder rippled and boomed, and didn’t stop. We tried to get some food in the restaurant, but Hotel-Lady informed us that something was being refurbished, or fixed, or maybe the kitchen was broken. I’m not sure – I wasn’t really listening, because I was hungover. She offered to make us ham and cheese baguettes though, which was nice.

We sat down at a table and waited. And waited. Aaand waited. And eventually, after Hotel-Lady had harvested the cow for its meat, killed the pig to make the cheese, milked the grain to make the bread and so on, we ate what turned out to be a quite expensive snack. Then we went back to bed, because that’s the sensible thing to do in a giant thunderstorm, when the rain is pissing down and you’re still hungover and humiliated by how you got drunk so quickly the previous night.

It was still raining when we got up. We went to the restaurant to see about getting some real food. Hotel-Lady informed us that whatever gremlins had disabled the kitchen were still there, but that she would be happy to make us expensive cheese and ham baguettes again. We promptly declined this offer, and instead enquired about where we might eat in the town – but apparently there was nowhere to do so in such a small community. We asked about ordering pizza – but it was Sunday night, and after Hotel-Lady made a few phone calls she assured us that nowhere was open to deliver.

And that’s how we ended up walking through the rain, to the next town along, to find a McDonald’s.

It was an epic journey. A couple of miles of uncharted* terrain, in which we got damper with every step, got stones in our shoes, and sneezed once or twice.
*except by Google
We walked up a long and boring road, past a couple of short and exciting miniature ponies. Crossed the lengthy and well-manufactured railway tracks without getting hit by fast and dastardly trains. All the while we grew ever more hungry, anticipating the feast ahead.

Some time later, mid-journey, we entered the next town, which seemed to have a bit more life in it. We navigated our way through damp and alien streets, and soon we walked past a pizza place, which was clearly still both open and delivering, despite Hotel-Lady’s assertions. This was quite annoying, as we’d absorbed quite a lot of French rain by then. But we pressed on – because McDonald’s was the goal, and you don’t change your mind half way through such an enormous commitment without being incredibly annoying.

Which is funny, because we also passed a Chinese restaurant, which smelled good, and five minutes later Miss-Matic decided she wanted Chinese.

Well, we’d walked across half of France to get to a McDonald’s, so Liz and I didn’t think she was serious. But she was.

I spent a bit of time rolling my eyes and making exasperated noises, but we turned around and went back to the restaurant. We walked in, only to be told that, sorry, they were only delivering.

I shook my fists at the clouds, cursing Miss-Matic for leading us astray; cursing Hotel-Lady for convincing us that nowhere would deliver food on a Sunday, cursing McDonald’s for being so far away, and generally cursing my lack of knowledge of French and the fact that I could only curse in English.

Then we turned back towards McDonald’s and retraced our squelching steps.

Despite these distractions, eventually we made it. Tired, sore, wet and hungry. And we ate, freezing our backsides off as the air-conditioning blasted over-enthusuastically through our clothing. It got to the point where we looked forward to getting back in the rain, because at least it was warmer outside

But then the storm really started. The drizzle turned into a downpour. The building shook as thunder rippled overhead. The sky lit up, over and over, lightening flashing and forking from all directions.

But we were freezing, and the hotel was distant. So as the rain lashed and the sky flashed, we dashed.

We later found out that the storm we walked through knocked out power to 49,000 homes, knocked over a bunch of trees, and generally fucked shit up in southern France.

I missed out a couple of things that happened on the way back, like when we took a detour to slay the local dragon, saved a small child from a horde of barbarians on miniature-horses, found fame and fortune and went through personal journeys of growth and discovery – but the way back is never as exciting as the way there.

And that was the great McDonald’s expedition of 2013. 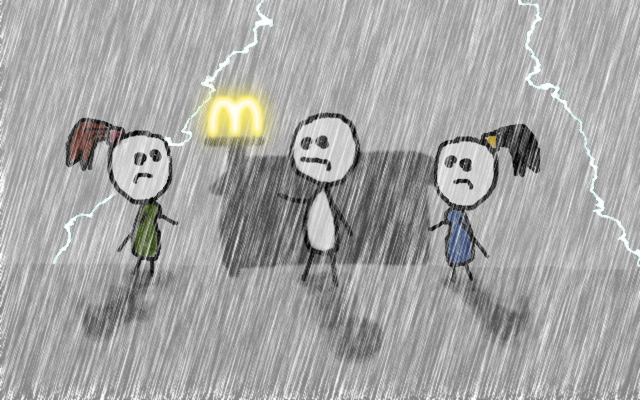