Yesterday I got stuck on the toilet.

As entertaining as bodily functions are, I’m the kind of person who needs a little extra entertainment in the bathroom. Sometimes I like to read a chapter or two of whatever I’m currently reading, but on this occasion, and somewhat predictably, I forgot my book.

If I have my phone to hand, I fiddle around with it. Sometimes I change the settings to annoy or surprise future-me. Sometimes I use the screen as a teeny mirror to check there aren’t spiders on the wall behind me, or pretend I’m a secret agent making sure I’m not being tailed. Recently, since I decided I should get a Twitter account to help promote my novel, I go on Twitter and forget to promote my novel. Instead, I give myself repetitive strain injury scrolling through bite-sized bits of whatever, wondering why the hell I have a Twitter account and what it’s for and what it’s all about, and if I should just delete the fucking thing, or learn how to use it, or something.

But on this particular occasion, I did none of those things. I played Brick Breaker instead.

Brick Breaker is a fairly simply Breakout clone. I know what Breakout is because it’s like Brick Breaker. It came preloaded on my phone. Every time I play it, within two minutes I decide it’s the most annoying, frustrating, piece of crap since the last time I had an annoying, frustrating crap – but I played Arkanoid – which apparently is also a Breakout clone – as a kid, so I guess it gives me fuzzy nostalgic feelings.

The premise of the game is simple: there are bricks that must be broken, and thou shalt break them.

The screen has bricks at the top, and a thing that looks like an overly-excited beverage coaster at the bottom. The coaster fires a projectile at the bricks at the start of the game. This projectile then bounces around the screen, off the walls and the bricks, in a manner which indicates the developers have never heard of, nor been affected by, Newtonian mechanics. The player’s job is to stop it falling off the bottom of the screen by moving the coaster left and right, and encourage it to destroy as many bricks as possible.

Now, most things I do, I do badly. Playing this game is no exception. It took me a week before I broke my first brick. A month before I reached level 2. I’ve had the phone over a year, and – until yesterday – I’d only ever reached level 8. There are 34 levels.

But yesterday, something incredible happened.

I was on fire.

I felt like the the nemesis of the entire construction industry.

I even felt like it might be kinda cool if there was a spider on the wall behind me – just so it could see just how awesome at Brick Breaker I was, and tell all its friends, and at the same time warn its friends to get the fuck out of my flat.

I was sitting there, basking in the glory of my achievement, when it occurred to me that I couldn’t move my legs.

They had been numb for a while. Probably since about level 6.

I remembered a wave of paresthesia passing; pins and needles in my feet between about levels 8 and 12. I hadn’t paid too much attention at the time, because – you know – I was too busy being awesome at Brick Breaker.

I tried to move my legs, and they dragged across the floor like pieces of firewood that didn’t want to get too warm. My feet felt like someone else’s. They were just lumps on the ends of my legs. I stooped down to prod some life back into them, and nearly fell off the toilet because my upper legs weren’t paying attention either.

It was around this point that I wondered if I had been on the toilet too long.

It was also around this point that I thought, ‘Uh oh.’

I had to do an awkward side-to-side shuffle to get my pants back up, still in a seated position, because I was pretty sure I knew what would happen when I tried to stand, and I didn’t want that to happen with my pants down.

And, sure enough, when I willed my legs to move, to force me up, they just pitched me forward onto the floor. I caught myself with my hands, and did an awkward backward-crawl thing until I was back on the toilet.

There was nothing I could do but wait it out. I slapped and poked at my legs, lifting them up one at a time, dropping them, trying to get life back into them.

It soon began to work, and it wasn’t long before I could wiggle my toes. I could feel the blood flowing back into my lower limbs, and circulation resuming.

I reckoned it would only take a couple of minutes until I could walk again, and wondered how I might pass that time. 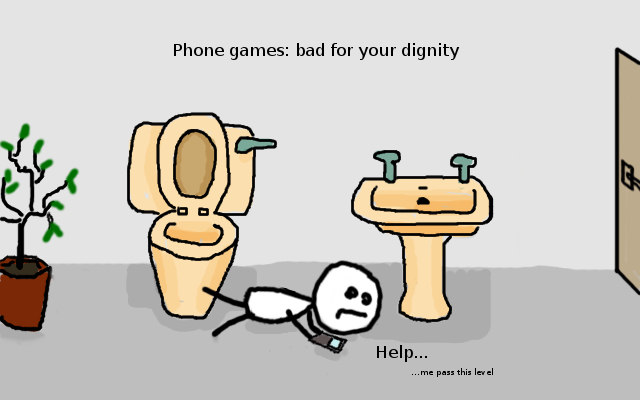