Right now, as I type this, a creepy toad ornament is looking at me.

This particular ornament is a little smaller than the size of a fist, made of dark wood. The upper jaw/head/back section is actually a lid, which conceals a small cavity for storing half-digested flies, lily pad crumbs, long-lost surgical forceps, or whatever else might be found inside a toad.

Although the creepy toad ornament is ugly, it isn’t inherently creepy. It’s creepiness comes from the fact that it watches me.

You know those paintings that show up in Scooby-Doo episodes, where the eyes move and follow the Scooby gang?

And you know that feeling you get, when someone is watching you? When the hairs on your neck stand up, and you get those unexplainable chills?

But no matter where I sit in the room, this maternally fornicating toad is always facing directly towards me.

I have no idea why. Every time I pass it, I straighten it out. I turn it perpendicularly away from the wall; I center it, so it faces the middle of the room. Misaligned objects also annoy Miss-Matic, so I’ve watched her with my own eyes, straightening this fucking toad thing…

And yet, when I’m sitting on the sofa, procrastinating, or reading, or watching TV, I’ll glance up, and the creepy ornamental toad will be angled directly toward me again.

It’s extremely unnerving. I mean, sometimes I like to scratch my balls when I’m sitting on this sofa. I don’t want some voyeuristic toad ornament watching me.

To distract myself from whatever else I should be doing right now (writing, scratching my bits, turning the creepy toad ornament back the other way), I have developed five possible hypotheses to explain it. These are as follows:

This is the simplest and most straightforward of the hypotheses. The creepy toad ornament is haunted by the ghost of a dead toad. It warms itself against the chill of the grave by reorienting itself a number of degrees on a daily basis, so it can look at me, because I’m an interesting thing for a dead toad to look at.

This is similar to the above theory, only the ornament is not haunted by a dead toad, but instead is the icon or avatar of an evil toad demon. It cools itself from the fires of hell by reorienting itself a number of degrees on a daily basis, so it can look at me, because I’m cool.

Whenever I see someone sexy, I like to look at them in a manner which makes them uncomfortable, and which invariably prompts them to describe me as creepy. Thus, applying similar logic, I am sexy and the toad ornament has the hots for me.

4.  Someone is breaking into my flat.

In this hypothesis, some prankster breaks into my flat on a daily basis to reorient the toad ornament by a few degrees, so that I might mistakenly believe the toad ornament fancies me. I have no idea who this prankster might be, but I believe such people usually have an accomplice called ‘Jimmy’, whose job it is to crack open the window so they can get in.

If none of the other hypotheses hold, I can only conclude that the creepy toad ornament is a splintered shard of my own tortured subconscious, while I am likewise none other than a cloven chunk of the creepy toad ornament’s maimed psyche. We stare at each other across the vast gulf that divides subjective consciousness, mirrors to the thin facades of each other’s narcissistic solipsism; two abysses staring back at each other, wondering where the fuck this analogy might be going, whether it’s time for a beer, and whether both our lives might be better if we just looked at the TV instead.

It is possible, of course, that none of these hypotheses are correct – but I’ll be damned if I can think of more reasonable explanations.

In any case, I want to scratch my bits, so I’m going to turn it away now. 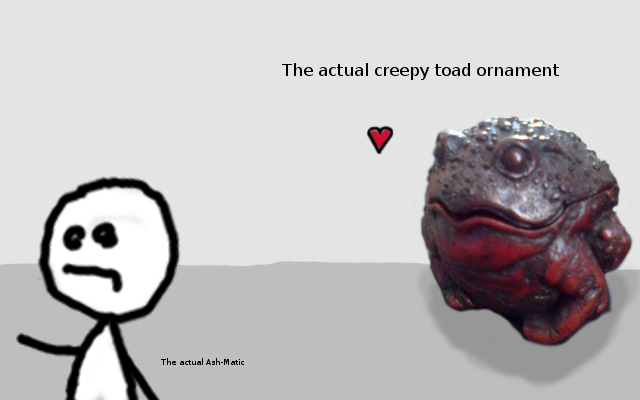