So good, in fact, that sometimes my natural dropping-things instincts kick in when I’m not even trying.

This is usually fine, except when I’m holding a thing – especially a thing that should not be dropped – like a baby.

Dropping babies is the kind of thing that can get you in trouble with babies’ parents, concerned bystanders and officers of the law – not to mention make you generally unattractive to women. I’m also informed it’s not good for the baby either – but what’s it going to do, beat me up? I’m more concerned about the women.

My fear of holding babies kept me away from them for a long time. I was thirty-years-old before I first held a baby. Its name was Kate (Hi Kate! Don’t read this. I like to swear), and I struggled to think of it as a she – because, to me, it was basically just something that shouldn’t be dropped.

I sat on a sofa, holding this funny-smelling small human cub, while only two rooms distant was a kitchen with drawers full of sharp kitchen implements – knives and skewers and other pointy sticks with unfathomable (but presumably culinary) purposes.

What if I dropped the baby on those knives?

So I sat on the sofa, terrified that baby Kate would slip from my arms and land on the knives in the kitchen, suffering coo-ing and aww-ing and people joking that the baby and I had the same hair-style.

And just as I felt my grip loosening – just as the baby began to slip from my arms onto the knives in the drawer in the kitchen – someone took it from me, and I slumped back on the sofa, sweating and palpitating and wishing the damn thing would just grow up already so we could have a beer together and laugh about the time I nearly killed it.

Since then I have held approximately zero babies, but now I have a new and terrifying dropping-things related fear.

I have recently found a job to do around my writing. I work in a cafe. I serve hot beverages to parents who bring babies into the cafe. I carry hot liquids between tables and up steps. Sometimes those babies lie in prams or baby carriages, next to their mothers’ tables, dreaming sweet dreams of boobs or first-person pukers or whatever, and I have to get a hot maraschino or chocotato or oversized three-person pot of tea past the baby, to the table.

This is not a good idea. I have a terrible fear of bathing newborn nippers in scalding liquid at least three times a shift. I also have alarming doubts about the structural integrity of teapots, of serving trays and saucers. Visions swim through my head of ceramic cracking, handles breaking, tiny lungs screaming.

I don’t even have a very good grasp of the horizontal. There’s so much that could go wrong. I wouldn’t trust me with solids, let alone liquids. Let alone hot liquids.

But on the other hand, I get an incredible amout of job satisfaction every time I deliver a drink without something dying.

The sound of a saucer settling gently on a tabletop is sweeter than the sound of a woman calling me to bed. The thunk of a tea-pot delivered with the same amount of tea with which it was filled is like hearing my name chanted by a victorious army, standing over the bloody corpses of our enemies on the field of battle. When a young mother thanks me for bringing her latte without killing her baby, it’s like hearing the doors of Valhalla creak open just wide enough for Odin’s hand to reach out and give me a high-five.

I am the great service-industry hero. Come and watch me in action. It’s thrilling. You’ll be ooh-ing and ahh-ing with excitement as I weave my way between the tables. Bring your dates. Bring your kids. 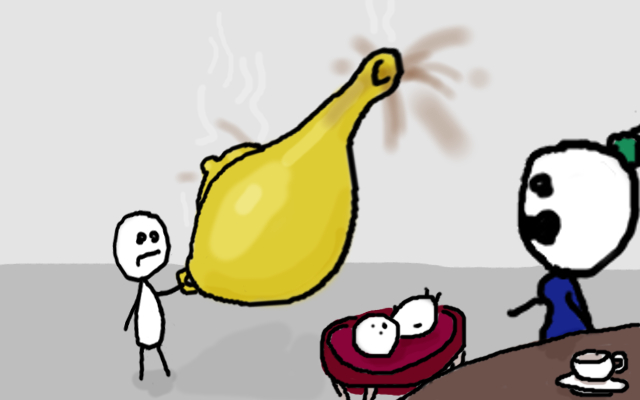