The Tale of the Mysterious Bong

I was lying in bed the other night, working out exactly how I would melt the West Antarctic Ice Sheet to drown the low-lying areas of the world if I were a supervillain, when my musings were interrupted by a bong.

By this, I don’t mean that an oversized piece of drug paraphernalia flew through my window on smokey wings of purple haze and struck me on the head, saving coast-dwellers around the globe from getting their socks wet – but that something, somewhere, went bong.

‘Ah,’ I thought. ‘My old nemesis, the mysterious bonging noise. You have tracked me down once again!’

Only the bonging noise isn’t so mysterious any more. I solved this riddle sometime last year.

Follow me, dear reader, back in time to my youth, when, to while away the hours waiting for sleep to claim me, before misanthropy grew in my soul, like furry green stuff in a long-forgotten, half-drunk mug of tea under the bed, I would work out how to save the world from sea-level rise if I were a superhero.

In those naive days, in the dark of night, there would occasionally come a bong.

It became a frequent occurance, and had no explanation. Nobody else seemed to hear it.

Imaginary heroics would be forgotten. I would jump out of bed, and peer out into the night, looking for the source of the bonging noise. But the night was still and silent. The noise was not repeated, and I would reluctantly go back to bed, frustrated and mystified.

The noise followed me over the years. I left the family home, went to university, and shared houses with friends.

Nobody else knew what I was talking about.

I would ask my friends. ‘Do you ever hear a bonging noise in the night?’

They looked at me like I was weird, and offered me the bong.

I would ask my girlfriend, if I had one. ‘Hey! Are you awake? Did you hear that?’

But I wasn’t imagining things. There really was a bonging noise, and it followed me around the country in the subsequent years.

The bong was impossible to explain. It seemed to come from outside, or occasionally underneath. It sounded exactly – onomatopoeically – like it was written. Bong. A metallic noise. A strange reverberating impact. A bong.

I found an old diary once, when moving homes, and I re-read some of my old ramblings. And there I found, written in a drunken scrawl across both pages:

What fuck is that bonging noise?!? I’ve been hearing it all my life!! What the fuuuuuuuckk??!?

The nature of the bong in the night clearly troubled me.

I could think of many things that might make strange noises at night. Creaks and cracks, boinks and doinks, clanks and thuds and scrapes and crashes. But what would make a bong?

It could be a gong, I supposed. A gong might make a bong. But I didn’t know even one person with a gong, and found it hard to believe that there were closet gong-bongers all around the world, waiting until I was trying to sleep before giving their gongs lone and mysterious bongs.

But then, last year, I figured it out.

Miss-Matic and I were living in the north of the country in a pretty skanky flat. I’d heard the bonging noise once or twice there, and still occasionally wondered what the hell it could be, but largely it had become part of the background mystery of existence.

I was in the kitchen, making mugs of tea. Kettle on first; then get the mugs out. Tea bags in the mugs, then sugar for myself, foul chemical substitute for Miss-Matic. Get the milk out, ready, and take a moment to scoff at the notion of those deluded fools who add milk before the water.

I poured boiling water onto the tea bags and stirred and squished them until the correct consistency of tea was achieved.

I slid the mugs across the counter to the pedal bin, and placed my foot on the pedal.

I pressed down with my foot – a little too hard.

The metal lid of the bin swung upwards, fast.

It struck the underside of the counter.

My brain stopped working. My eyes defocused. All the pieces fell into place.

I removed my foot, then enthusiastically repeated the action, opening the bin again.

And again, and again. Bong! Bong!

Many a mysterious bong was heard by our neighbours that night, let me tell you.

Miss-Matic wandered in, wondering what the hell I was doing.

I’d figured it out. All these years, I had been hearing overenthusiastic openings of metal pedal bins under, or against, kitchen counters in nearby homes.

Maybe I only heard it when they had doors or windows open. Maybe originally it had even been my own father, making tea for my mother, late at night, that had disturbed me all those many years ago.

Maybe this was actually a much more common noise, that I only ever registered in the silence of the night, when I wasn’t watching TV or listening to music, when there were no sounds of traffic, no sirens or voices to fill the air.

The mystery was solved.

Now, whenever I hear the bong in the night, I can relax and go to sleep, dreaming my dreams of villanous mayhem, knowing that people are not littering their own kitchens, and that all is right with the world. 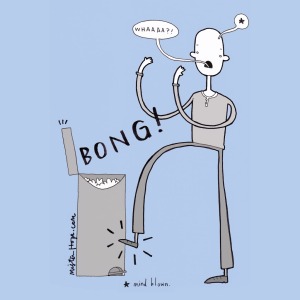 Check out his work at misterhope.com– especially if you like things that are awesome and/or superheroes.