But Miss-Matic and I had a guest to stay the other day, so we scoured the back of the sofa for enough loose-change to show him the sights and sounds of our small town, starting by going across the road for a drink.

Upon arriving in the pub, pre-lubricated with wine and beer and the smell of a suspicious vodka that I didn’t allow closer than arm’s length, we discovered that a band was playing to a bunch of locals and their mothers. A girl with reddy-pink or pinky-red hair was screaming into a microphone. I couldn’t really discern what she was singing, but she sounded rather angry.

We got drinks at the bar and watched the band for a while. The girl continued to rage, and I soon began to wonder if she was angry with the microphone itself.

No, not just angry – furious.

She clutched it like she was trying to throttle it, to squeeze its scrawny neck until the head popped off in a gout of blood and sparks.

When the song ended, the audience clapped enthusiastically. I guess they had all had unpleasant experiences with microphones too. I tried to join in the applause, but I was holding my pint.

Clapping with a drink is hard – I just ineffectually tapped the side of my glass. The microphone had no idea that I was on the side of the reddy-pink or pinky-red-haired girl. It couldn’t hear me at all.

I stamped my feet for a bit, but Miss-Matic told me to stop because I looked ‘weird and stompy’.

The band embarked on their next song – a hard-rocking tale of how a microphone killed a young girl’s dog or something – and I used this time to plan how best to applaud when it concluded.

I figured I would use the power of plurality – the dexterity of the duo – the adaptability of aquaintanceship! – by clapping one-handed with my friend. That way we could both hold our beers and clap the band at the same time.

And so, when the song ended, that’s what we did.

Unfortunately, our timing was off, so we looked like one-armed four-year-olds playing pat-a-cake without any understanding of the rules – or maybe over-enthusiastic terra-phile aliens practising congratulatory high-fives.

The red-or-pink-haired girl announced their last song. The way she introduced it led me to believe it was going to be a cover, a song I should know, a famous hit by a famous band. Maybe it was, but I’m not aware of many songs about revenge on a microphone for running over a cat.

I nodded along, enjoying the tune, but all the while wondering how I could best show my appreciation for the band without having to relinquish my beer. It was easy for Miss-Matic – she had rings on her fingers, so she could still clap by chinking them against her glass. It was while pondering this that the solution came to me:

I could just chink my beer against my belt buckle!

So the band played on, and when the final chord died, I gave an enthusiastic ‘Woo!‘, and proceeded to show my appreciation of their playing – and antipathy towards microphones – by chinking my pint-glass against my belt buckle.

And that’s why it looked like I peed myself on Saturday night. 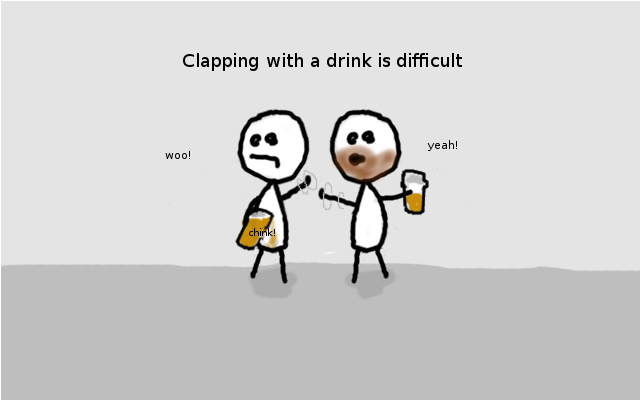