As we step into a brand new year it is important to set one’s goals and agendas up front – this is why we make New Year’s Resolutions after all – and so I have decided to spend most of 2013 missing 2013 by napping as frequently and lengthily as possible.

I just had quite a lovely nap with Miss-Matic after dinner. She insisted we set an alarm for one hour because she had ‘work’ to do – which seems to consist of mainly spreading sheets of paper around the floor, talking to herself, and telling me to stop asking her if she fancies a nap.

Now, my faculties aren’t exactly the sharpest after waking from any form of slumber, so I was a little surprised when Miss-Matic entrusted me with the alarm clock-side of the bed – which switches sides depending on where the alarm clock decides to sleep.

When the alarm clock went off we played the ‘five more minutes’ game – of which the rules are as simple as they sound. We played five or six rounds of this game, hampered by the fact that the alarm clock is many years old, and the snooze function broke most of those years ago. Whenever it went off I had to reset it for five minutes into the future, a task which was wasn’t so easy for my sleep-addled brain.

After the first five minutes I found myself changing the clock time instead of the alarm time.

The second time I removed the battery and stared at it for a while.

The third time I just turned the alarm around and around in my hands and mumbled something about cake when Miss-Matic asked what I was doing.

But eventually we made it through.

And in about an hour’s time, it’ll be time for bed. Yay! 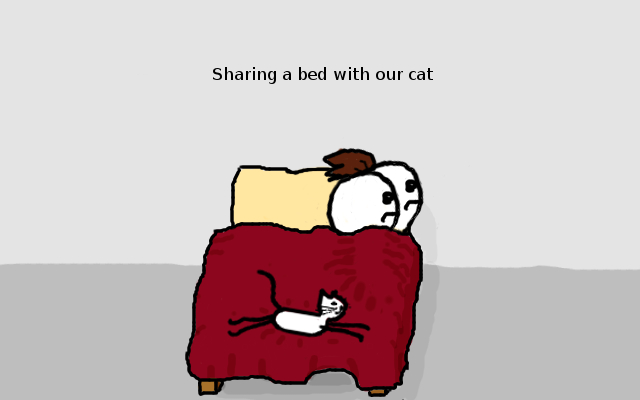