Yesterday I left the flat to go job hunting. Everybody goes about this arduous activity in different ways, but for me this involved walking down the street with my hands in my pockets, kicking a stone along, and wishing that I had a treehouse.

Every so often I would look in a shop window to see if there were any signs advertising vacancies for in-store writer wannabes, bed testers, or beer tasters – but there weren’t any.

I did a circuit of the library and the town’s two bookshops, hoping to see signs stating they needed someone to check the plots – but there weren’t of those either. My final option was the Job Centre, but that was just depressing, so I did the bookshop-library-bookshop circuit another couple of times in case a sign had gone up in the meantime.

So I ended up in the Job Centre anyway, listlessly pressing the screen of the self-help machine, wondering if anyone in the area needed a beard model, when I found a listing for a Sales Advisor in the petrol station behind my flat.

Fuck it, I said to myself. If I apply for a job in a petrol station I’ll probably write about it on my blog, and most of the people who stop by are Americans. From now on, I’m going to call it a gas station.

The doors of this gas station were only 75 meters from the back door of my flat (I know this because I later measured it on Google Earth), so I printed out the job listing with the intent of putting it in my pocket and forgetting about it, and went back home.

A couple of hours later, Miss-Matic arrived home from her own professional career-type job, with exciting news for me.

‘I saw a sign in the window of the petrol station! They’re looking for part-time staff!’ she said.

‘Do you mean the gas station?’ I asked.

‘It would be perfect for you! You could work evenings, or nights, to fit it in around your procrastination!’

‘Do you mean my writing?’ I asked.

‘You should go there tomorrow and ask about it!’

I begrudgingly got out the listing I’d found earlier, and showed Miss-Matic. Her enthusiasm only grew, and she talked at great length about how great it is to have a job to hate.

The Earth spun on. Shadows shifted; day turned to night. Today turned into tomorrow – which is the same as yesterday turning into today, because I’m writing this today, not tomorrow. You might be reading this tomorrow, or the next day, but don’t let that confuse you.

I got up, took a shower and put on a shirt. I left the flat and went down to the back door, and walked the 75 metres to the doors of the gas station.

I paused there, frowning. I could see no sign advertising the job. I knew Miss-Matic couldn’t have been mistaken, because the Job Centre had also listed the vacancy. I convinced myself of this logic by taking the listing from my pocket and checking it was real. Then I pinched myself, just to be sure.

I shrugged and tried to go in.

But the doors were having none of it.

There was no handle. The doors looked automatic, but they weren’t responding. I looked around the frame in confusion, and stupidly pushed on the glass. Then I spotted a sign which suggested that there was a button to push to gain access. I wondered briefly whether the button was located inside, as a security measure for the staff, or outside for no apparent reason other than to confuse me.

So I looked down and noticed a button beside me, at about waist-height. It was on a small white plinth. There was a glowing red spot in the centre, looking rather like the camera eye of HAL 9000, and a message: Press for Access.

So I pressed the spot, and turned back to the doors.

I looked down and pressed it again.

I pressed it a third time, harder.

I turned to the petroleum industry’s version of HAL in frustration and began stabbing the spot angrily. When I heard the doors finally open I turned to see that it wasn’t my actions that had caused them to yield, but that a member of staff had opened them from within.

‘It does work,’ she assured me sagely. ‘I use it every day.’

I followed her in, bewildered. As she went back to her spot behind the counter I saw another member of staff returning to the back room. Clearly they had both been wondering about this incompetent man who couldn’t even get through a door without help, and questioning how the hell I managed not to die of stupidity on a regular basis.

And that’s when I told her I was there about the job. 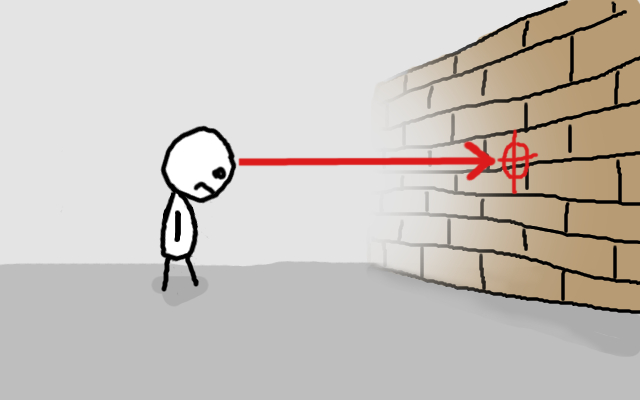