There are certain characteristic noises that can be heard in my rented flat.

One is a manic squeaking and hammering of pipes whenever one uses the toilet – a phenomenon that started for no identifiable reason last year. It was almost as if the toilet decided that it was underappreciated, and resolved to thenceforth announce whenever it is in use to all the other residents in the block.

Another noise is the summon to battle when an arachnid intruder is encountered, an event that occurs with alarming regularity. And a third noise is a howl of despair upon opening the cupboard where the biscuits are kept, when one discovers that no biscuits are there to be found.

But there has been a recent entrant to this list of noises, a sound characterised by a series of small pat pat pats, followed by between one and three loud thumps.

I’ve been learning to juggle.

I’m not very good at it. I don’t think I’ll ever be very good at it. I’ve been taking it seriously (as seriously as I take anything – which actually makes the use of the word serious quite inappropriate) for about six months. I borrowed a trio of juggling balls from a friend – prior to this, the most I could manage was three pats, followed by three thumps. Now, on a really good day, I can manage about twenty pats, with just one thump.

I live on the ground floor, which is fortunate, otherwise my neighbours would probably be out for blood at my insistance on dropping the juggling balls all the time.

But if I’m really so bad at juggling, why do I persist at it?

The answer is precisely because I’m so bad at it.

We all know exercising is boring. The Problem of Exercise is not a conundrum that can be solved. But juggling isn’t exercise – juggling is playing a game. It’s performance art. It’s fun. You get three brightly-coloured things full of beans, and fuck about with them until you’re bored.

If ever become good at juggling, I’d have an impressive notch on my belt. I could do it at parties, or at the beach. I could do it at night, with luminous juggling balls, or use my talents as a mating display to seduce sexy clowns. But if I never get good at it, that too will suit me fine – because my ineptitude makes it a great workout.

Every two seconds I have to run around the room chasing one of those little fuckers. I have to lurch around like a drunken fool to stay underneath the bastards. I have to duck and dodge and sidestep to meet their downward trajectories, only to have my slow and stupid fingers fail to close on them anyway.

And so, when I juggle, I work up a hell of a sweat. I juggle like I’m wrestling carp covered in baby-oil; chasing after runaway guinea pigs with preternatural gymnastic abilities; trying to snatch bats out of mid-air while they duck and dive and laugh at me with their squeaky bat-voices, actively using their sonar to avoid my flailing hands.

This is how I get my aerobic exercise.

Juggling is a fun way to work out, if you’re shit at it.

Of course, there is the danger that one day I’ll get good. I’ll drop the balls less and less over time; train my brain on those parabolic arcs; hone my muscle memory and develop something approaching talent. But if that becomes the case, I’ll just switch to four juggling balls, then five. I’ll try to juggle one-handed, then blind-folded. So long as the juggling balls keep hitting the ground, I’ll keep chasing them. And if I ever run out of ways to improve, I’ll be the best juggler in the world anyway, and the attentions of all the sexy clowns I’ve seduced will probably keep me in shape instead. 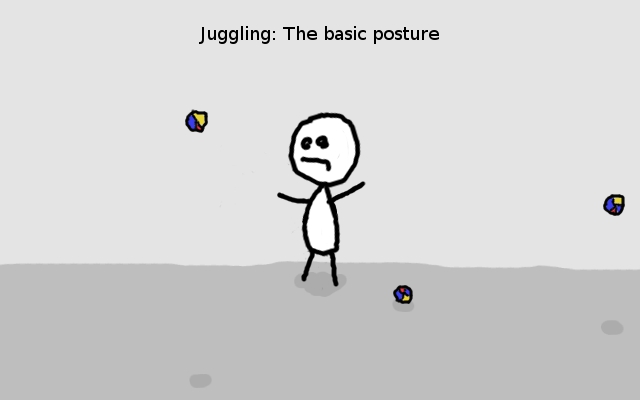