Like a gladiator walking into the colloseum, checking he hasn’t left his sword on the kitchen counter, I went into my exam, checking I hadn’t forgotten a pen.

Of course I hadn’t. I was armed to the teeth with a single biro, and five single back-up biros.

Invigilators prowled the room like hungry lions, ready to chomp down on the haunches of anyone with a phone, while the clock on the wall loomed large, counting down until the start of the exam like some kind of giant clock – only a little smaller.

I took a seat. Any old seat. And then I took another – with the correct exam paper before it. Some guy at the front of the hall was saying something about bringing unauthorised materials into the exam hall – but I confess I was too busy doing lines off the desk to listen.

And then we were off.

My priorities were simple:
1. Put chewing gum into the hole in my face, making sure I got the right hole this time.
2. Pass the exam.

I read the questions and started to write. And then I wrote more, and then some more. After what felt like a couple of days, I had to stop – my fingers felt like bananas.

After two hours I was bored and in pain, so I took my swollen digits and came home. Fortunately the exam had ended by then. I think I did okay, but I envy neither the marker who has to interpret my illegible scrawls, nor the student on whom that marker will inevitably give up.

But now I’m back home. My finger still feel like bananas, but now they’re gliding across my laptop like they’re bananas covered in baby-oil. Feels kinda creepy, but my laptop doesn’t seem to mind. 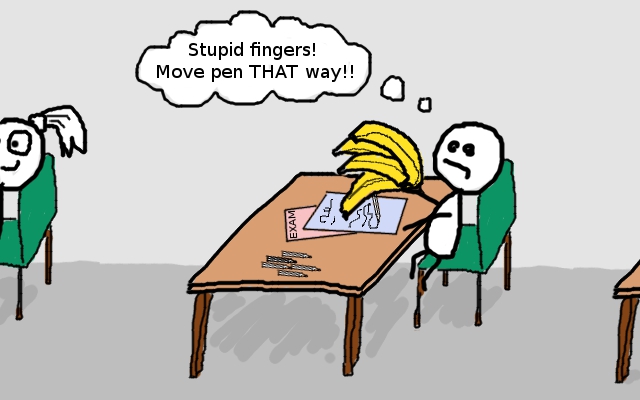