Everybody knows that revision is boring. You take a bunch of stuff that was boring the first time you read it, and read it again. Then you go on Wikipedia under the false pretext of clarifying some point you don’t quite understand, but actually to find out a bit more about sea-cucumbers.

Sea-cucumbers are not inherently that interesting, unless you’re some sort of sea-cucumberologist, or the kind of person who’d be fascinated to discover that a small cult of fifteen fish once set up a ranch in a sea-cucumber’s anus, hid out from the FBI, grew marijuana and molested each other while waiting for the coming apocalyspe…Wait… That is interesting…

Two hours later, tabbed browsing has become your worst enemy. Your terrifying exam is two hours closer, and two hours of revision can cover a lot of ground. In two hours, I can review my notes once more, do a little unnecessary highlighting, and half-heartedly attempt a mock-exam paper.

In fact, in two hours, I could probably fully prepare myself for my exam.

But look at the time! I have much more than two hours of revision-time left!

Might as well go see what’s new on YouTube for a bit, blaze another trail through Wikipedia, or write a lump of unnecessary text for an imaginary audience.

At the back of my mind I find myself calculating how long I can justify my continuous procrastination. It’s not like I have anything more important to do – I just don’t want to revise. It’s not even that the subject matter is boring (LIES), it just doesn’t seem too important right now.

‘Not important?!‘ – I hear you cry. ‘Isn’t this your future? Your prospects? Your chance for a stab at a job that doesn’t make you wish for a stab every time you get up to go to work?‘

Ice my brain with existential angst. Sprinkle it with a little more guilt. Pop a cherry of you-are-your-own-worst-enemy on top.

And then fuck ye off. I’m trying. Kind of.

But the truth is, I’d rather insert sea-cucumbers into my own rectum and climb into the poo-pipe of a sperm whale. Then we can all play Russian doll happy-familes and wait for the coming apocalyspe. I get the feeling my exams won’t seem so annoyingly important then. 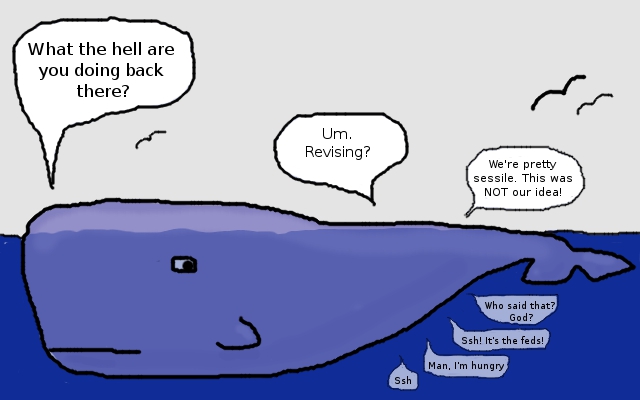