Ash-Matic Does Whales in the Swimming Pool

But regardless of how fun it can be, a swimming pool is just a poor person’s ocean. It doesn’t have tides. It doesn’t have beaches. It usually doesn’t have waves to play in, or interesting weather phenomena like waterspouts or sea-fog. It’s filled with far less interesting wildlife, and is a terrible as a trade-route. On top of all that, it’s only about half the size – which means the urine concentration is twice as high.

But sometimes the ocean is just too far away, and you can’t be bothered, so you go to the swimming pool instead.

One thing you can do there is swim. This involves the expenditure of a lot of time and energy to propel your body at incredibly slow speeds in one direction, until you hit your head or your hand on the hard thing at the end of the pool. Then you turn around, flailing wildly, and go back in the other direction until you bruise another body part. You repeat this many times, until you drown, or get out of the pool.

The other thing to do in a swimming pool is fuck about. Some pools make this easier than others – they have wave-machines, slides, things to jump off and sanitary products to avoid – but the most exciting feature of other pools are their square shapes and relative wetness.

It was to the latter type of pool that Miss-Matic and I went the other day. We had different motivations – she wanted to swim back and forth and get water in her sinuses; I wanted to fuck about.

But ultimately, these two activities are incompatible.

It’s hard to swim when your boyfriend is pretending to be a shark and has their teeth clamped on your thigh-flesh. It’s also hard to pretend to be a shark when your girlfriend is kicking you in the face. You generally both end up at the bottom of the pool, full of water, not having much fun. And then you get mad at each other and fight when you get home, and neither of you feel like playing shark-swimmer sex roleplay any more. It takes the fun out of it.

So we had to compromise.

But eventually it was my turn, and we got to fuck about. I wanted to play Whales, because whales are cool, and one of the best thing about our planet – but first I had to teach Miss-Matic the rules. These are quite simple, and I present them here.

The Game of Whales:

It took some time, but eventually Miss-Matic got the rules, and soon we were in opposite corners of the pool, shouting at each other, our voices echoing over the heads of some very confused elderly swimmers.

Ultimately we concluded that in the wild Miss-Matic and I would make very good whales, for our ability to communicate underwater, if not on the surface. I won the game because she got bored after a while and wanted to do roly-polys in the deep end – but everybody knows a real whale wouldn’t be able to fit in the deep end, let alone do roly-polys there – which clearly made me the whale with the better spatial awareness, and therefore a better whale overall.

I haven’t copyrighted the rules for Whales, so feel free to play it for your own swimming-pool enjoyment – but please don’t adapt it into other forms of media, because I’m planning to turn it into a table-top board-game when I have some free time. 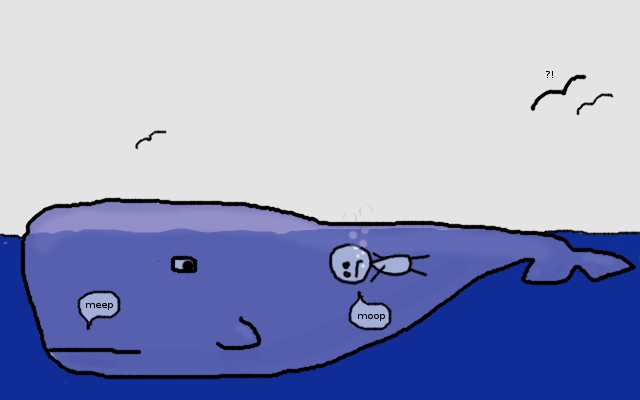