Okay, okay. I suppose that is a somewhat misleading title.

Of course I’m not exercising. Don’t be silly. I’m in bed, drinking coffee.
Maybe I should have called this post:

Ash-Matic Thinks About Doing Exercise In a Minute.

Ash-Matic Ponders the Problem of Exercise.

I think I prefer the last one, after all, there IS a Problem of Exercise. We all know this. It stands up there with the great philosophical problems, like the Problem of Evil, or the Problem of Other Minds – only nobody dares to treat it with the same academic consideration or importance, for fear of seeming lazy.

I could do some exercise, right now. I could push my laptop aside, slide out from under the blanket that rests across my shoulders, push the duvet off my lap and expose my scrawny legs to the freezing air. I could traipse reluctantly over to the heavy thing in the corner and lift it up, then put it down, then lift it up, then put it down. After all, I think that’s what I put it there for. It was a while ago.

Then I could go over to the bar-thingy and dangle from it for a while, wondering when my stupid arms will realise that I want them to pull me up.

Finally I could lie on the floor and curl up and cry for a bit, and then uncurl, then curl up, then uncurl – and so on, until my abs become what’s known in the industry as ‘rock-hard’.

I could. This is true. We all know it is true. And after all this fun, I’d end up in the shower, getting wet. And when I’d emerged from the shower I’d feel clean and healthy, and good about myself for giving it a go. I might even resolve to do the same thing the next day, and the next, and dream of the long-distant days of summer, where my bronzed muscles gleam in the eyes of hot beach-babes and modelling contracts fall in my lap like bits of lettuce from a sandwich.

But none of this is going to happen. Why not?

Ah. That is the question. WHY not?

You, my friend, have encountered the Problem of Exercise.

But philosophical enquiry doesn’t work like that. By writing this, I’ve stared too far down the rabbit hole, and now the rabbit hole is staring back. There is no answer to the Problem of Exercise. That’s why it’s a problem.

There is NOTHING stopping me from exercising. I want all the benefits of exercise. I have the tools of exercisability at my disposal. But am I going to exercise? Of course not. Don’t be silly.

Such is the Problem of Exercise.

And anyway, not to make excuses or anything, but while my mind is venturing down the corridors of philosophical thought, I might as well reflect on that other problem I regularly encounter – the Problem of Doing Assignments. I’m pretty sure it’s related.

I do think it’s important, in our busy and stress-filled lives, that we stop every so often to consider this stuff. We can’t run around all day, exercising and doing assignments, without taking a moment to stop and reflect on the great problems of existence.

We owe it to ourselves. 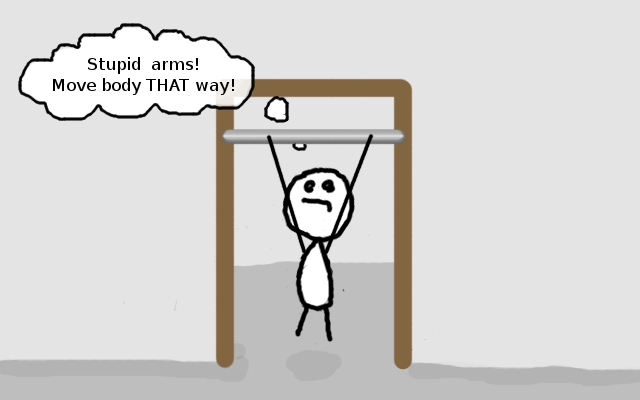