There are many differences between the genders. Some of these are obvious – like a pair of lovely boobs – but it’s rude to stare, so we’re all obliged to pretend they’re not that obvious.
And when making statements about differences between the genders, one has to be careful because there are always exceptions to those statements – men with lovely man-boobs, for instance – and this can make spotting differences more complicated.
The situation becomes even more precarious when discussing behavioural differences. There is a whole array of categorical statements which have the potential to cause great offence, and bring fiery retribution down upon oneself.
For instance:
‘Girls like things that are pink, but boys like things that are exploding helicopters.‘
‘Men kill things with their bare hands, but women use a knife and fork.‘
or
‘Women are terrible at everything, but men are slightly better at that.‘
This kind of thing can only bring down trouble from both sides of the gender divide.
But today I am going be bold, and point out a behavioural difference that I have personally observed, and risk the wrath of the masses:
Men like to scratch in public more than women.
Sure, I’ve seen girls scratch themselves in private. You can pay to see that kind of thing, if you are so inclined. But men do it in public, with no shame, no thought for proprietry, and no regard for tens – maybe hundreds – of years of not living in trees.
I’m guilty of this too, of course. If it itches, I’ll scratch it.
Sometimes the itch runs away from my nails and I have to chase it all over my body, like my hand is a wide-eyed kitten and the itch is the red dot of a laser-pointer. And sometimes, if my beard itches, I like to scratch it back and forth on top of a fence. And sometimes, if the itch is on my back, I make Miss-Matic hold out her hands like a petrified monster, and then I jump up and down before her, scratching the itch on her frozen claws.
But some physiological environs require a little more discretion, and if those areas need scratching, I mostly do it myself, and try to avoid doing so on a crowded street, or on camera.
Not all men are this discrete.
I had the good fortune to be at my friends’ house on Saturday, watching the Six Nations rugby final. And rugby players like to scratch themselves quite a bit.
So do the coaches. In fact, during the second half of the game, every time the cameras focussed on the Welsh coaching box, one man could clearly be seen having a vigorous scratch of his nuts. Millions of people were watching that game – clearly this man was worried that his rugby-coachdom dreams would crumble and die beneath the weight of the French scrum, and was preparing himself for an alternative career as the poster-boy of public masculine scratching.
But that wasn’t even the most audacious case I witnessed this weekend.
Before I arrived at my friends’ house on Saturday, I went to look for a refreshing drink of a refreshing substance. As I was walking down the street, I passed two gentlemen of an age approximately similar to my own, standing in the tiny front-garden of a terraced house.
They were facing away from me, and looking thoughtfully up at the window-frame they were fixing. One of these men was wearing a pair of loose football shorts (soccer shorts, Americans. This is an important distinction, because the shorts are loose and light).
As I passed, the man in the football shorts reached behind himself, and I saw in his hand an unremarkable-looking claw hammer.
What he did with it, however, was not unremarkable.
He manouevred the head of the claw hammer back between his football-short-covered buttocks – with the claw-side of the head aimed inwards and upwards.
‘Nooooooo...’ my brain began.
The head of the claw hammer went higher.
‘…ooooooooo…‘
The head of the claw hammer went deeper.
‘…oooooooo…‘
And the man began to scratch.
‘…oooooooo…‘
And quite vigorously did he scratch.
I don’t know what kind of itch that man had, but it must have been quite, um… entrenched. And clearly quite serious if the pointy-end of a claw hammer was the appropriate tool for the job.
I’ve never seen a woman do this sort of thing, and can therefore only conclude that men are more inclined to scratch in public.
Or maybe women just itch less. 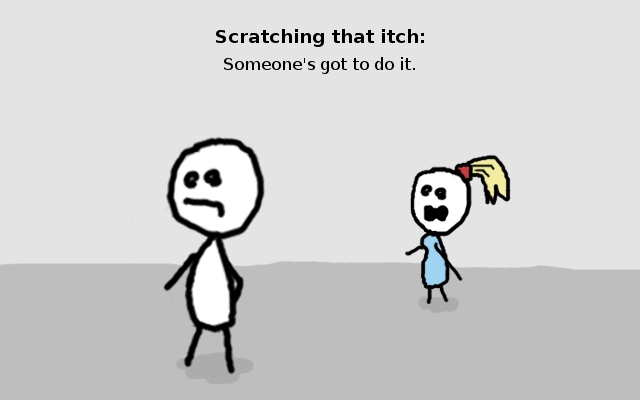