Ash-Matic Does Likes and Dislikes

I’m a grumpy person, and so, I like not liking things. I get a sense of familiar reassurance when there is something I don’t like, a sense that everything is right with the world – that I can clearly distinguish between good things – which are likeable – and all the other shit on the buffet of life.

Conversely, there are some things that I do like.

And, as a grumpy person, I don’t like this fact.

Why should something make me happy? How dare it? Do I have no control over my own emotions? What if I don’t want to like it – but like it anyway?

Liking something makes me do stupid things. I laugh at stupid jokes nobody else is stupid enough to laugh at. I eat stupid food that will probably give me stupid health conditions. I try to make friends with dangerous objects – like that time I touched an electric fence because I liked how smooth the wire looked, and then did it a few more times because I quite liked being electrocuted too.

Liking something makes me feel helpless, and at the whim of any old random combination of emotion and occurrence – like I have no control over myself, and thus no real free will at all.

So I don’t like liking things. This is why I’m grumpy.

Now, before you get too caught up in analysis of the unfeasibly recursive paradox of my likes and dislikes, allow me to distract you with an example:

The other day, Miss-Matic and I went to a gig, and saw one of my favourite bands in action – a bunch of bearded Canadians with more talent than it is possible to describe through the medium of an amusing metaphor, so I’m not going to bother to try.

This band have been a favourite of mine for a couple of years. They make me do annoying things, like singing really loudly at a pitch neither my voice nor the construction of my home is designed for, jumping up and down on things that shouldn’t be jumped up and down on, and having a song stuck in my head for an entire week, whilst STILL not quite knowing all the lyrics.

So I was at their show, unreasonably excited, and fortunate enough to get a spot against the barrier in the front row. I was positioned directly before the guitarist on the left, and it soon became apparent that this was a guy who did not give a fuck.

He played his guitar with the kind of casual skill and ease someone like me only displays when eating cake. And I still get crumbs on my beard. This guy didn’t get his guitar on his beard – he was that good, and made it look that good.

And behind him was the bassist. This guy was less casual, less cool. Instead, he was smiling. I took offence at that smile. I watched his fingers moving on the bass strings – and they were clearly made of the reconstituted leg-meat of Usain Bolt. I wanted him to concentrate on what he was doing, to frown down at the strings like I do, to slowly, methodically, and accurately play each note.

But no. This guy played five strings of awesome bass with the kind of skill and ease someone like me only displays when trying to get crumbs on my beard.

At this point I found myself getting annoyed. How dare they be so good? How dare they make me so impressed? How dare they force enjoyment out of me like someone squishing the toothpaste tube too hard? What if the toothpaste wants to stay in the tube? And further along on the stage, the rest of the band were doing their respective things and being fucking good at it too, which was even more annoying.

Now, just in case you’re labouring under the misapprehension that I’m easily impressed, you should know that this wasn’t three-chord punk, or boring indie music. It wasn’t middle-of-the-road radio rock. This was several orders of magnitude of talent beyond all that. This was some technically awesome progressive metal bullshit.

And it wasn’t just that these guys had talent. You can sit on your bed in your parents’ house, fiddling with your instrument, learning all your favourite songs obsessively for ten years before finally emerging and discovering non-solo sex, and maybe you’ll get that good too. But to play that kind of material, with that kind of casual just-dancing-through-the-daisies ease – with that level of band-wide coherence, and collaboratively-written music that fucking good… The lyrics, the rhythms – all the fucking songs I wanted to hear?

And now this band – the same band that forced me to enjoy myself in the bathtub the day before the gig, sitting with Miss-Matic, scaring the noisy-sex couple upstairs with our terrible singing while we drummed along on the surface of the water to our own interpretation of the sixth song on the first album, soaking the entire bathroom in the progress – were now just rubbing salt in my wounds by forcing me to enjoy myself at their show.

This was quite annoying. And to top my annoyance off, there was this idiot guy in the front row of the audience who kept spilling my drink. He was shrieking with excitement, making a noise like a double-decker bus had parked on his testicles, singing along even when he clearly didn’t know half of the words, jumping up and down and punching his fists in the air, and generally embarrassing himself.

That guy was me.

I bought a top after the show and am wearing it now. It’s a pretty cool top, and I don’t like that either.

I wish they’d been shit. 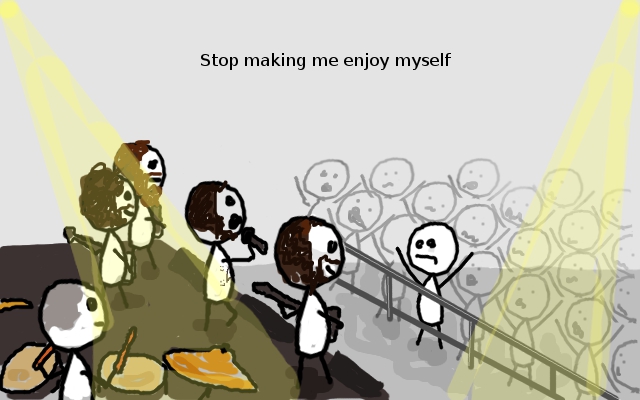