The other night I had two pieces of news:

One was that the lovely Miss-Matic would be away overnight the next day, due to a work commitment; the other was that our fridge-freezer had broken.

Now, I’ve been living in this world for a couple of years now, so I know the rule for this kind of situation:

When one is the recipient of two pieces of news, those two factoids have to be classified into ‘good’ news, and ‘bad’ news categories.

They can’t both be good, or both be bad – that would be silly. How would you tell someone that you have two pieces of news? How would you ask them which one they wanted to hear first? It wouldn’t matter. They wouldn’t care.

No, one has to be good, the other bad.

So I sat down on the sofa with a flip chart and some markers, my laptop, an abacus and a good-luck souvenir poker chip from Las Vegas, and began to work out which was which.

I think it’s fairly obvious what my conclusions were, but since you’re reading this you clearly don’t have anything more important to do – or maybe you’re just killing time while your subconscious is considering murder, or suicide, and if I can just distract you for a few seconds more, the heroine (or social worker) might arrive in time to save the day. So it’s probably my social responsibility to tell you.

With Miss-Matic out of the house, I could pretty much do anything I liked, and these things can be divided into two categories:

This consists of all the things of which she might not approve, and would never need to know about. For instance I could:

In Miss-Matic’s absence, with no distractions, and no need to engage in the kind of hilarious and thought-provoking rhetoric that usually characterises our evenings, I could:

While this second category of options sounds infinitely less appealing, those things do need to be done, and procrastination only gets you so far in life. Unless you’re a professional procrastinator – which is a career-path I would like to one day pursue, but am busy right now.

With all these options available to me, and with my mind already staring wide-eyed with wonder at the possibilities, Miss-Matic’s forthcoming absence was clearly the good news.

And as for the fridge-freezer, well, that was obvious. There was lots of food defrosting. Somebody was going to have to call the landlord, wait until some guy shows up at hand-wavy-o’clock on a day when I have better things to do – only to look at it and say, ‘Hmm. It’s fucked, mate.’ Then he’ll go away and leave me to wait desperately by the phone for the landlord’s preferred choice of domestic-appliance provider to call back and arrange an appointment to deliver a new one.

I’m pretty sure that counts as bad news.

How wrong I was.

I didn’t do anything in the fun category. With all the freedom of the flat in which to entertain myself, I did absolutely nothing entertaining. Not even the thing with the death-ray.

I also did nothing in the responsible category. With all the work I have to do, I left it all, to be left to be done at another time, at another time.

Instead I did things in a new category, one I did not anticipate:

These things that do not an exciting or productive day make. A day in which the boring category is exhausted is not one that will flash before your eyes as the wheels of the number 52 bus leave their regulation-depth tread marks on your torso. It consists of thing like:

I did all of these things, and not much else. It was a waste of a day.

If Miss-Matic had been around, I could have done fun things with her – like that thing we do with the spaghetti and the wind-chimes. Or the thing that needs all the lube. Or we could have argued about the ethics behind different ice-cream flavours. Maybe I could have told her my two jokes de jour again – they’ve been my jokes de jour for about a month now, but we derive entertainment value from her telling me to stop telling her. Or at the very least I could have pretended to do some of my work alongside her while she found me new jokes de jour online.

So it turned out that Miss-Matic’s overnight absence was the bad news all along.

But, if you’ll be so kind as to remember the good-news bad-news rule, that meant that the broken fridge-freezer constituted the good news.

‘How can that be?‘ – I hear you whisper – your voices subdued with awe and a more than a hint of jealous wonder.

Well, as the temperature slowly increased inside the fridge, all the food within needed to be eaten within a limited time-frame. Especially that giant pack of bacon Miss-Matic bought to cook her guests the other day. The giant pack of bacon that wasn’t opened in the end.

All that bacon… All needing to be eaten… All at once…

And they were lovely.

You saved my day. 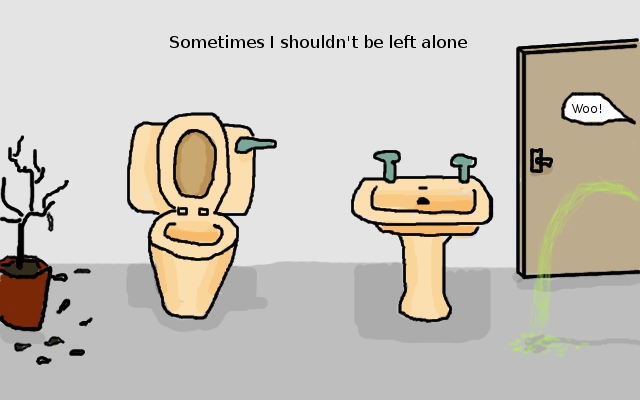