I like cats, but my affection for these aloof felines sometimes comes with negative consequences – and therefore I don’t always like that affection.

For instance, as much as I love getting cat on my face, my immune system doesn’t. It makes my skin turn red and bumpy. I start to wheeze and sneeze. I scratch my neck. And if I get cat in my eyes – either directly or via my fingertips – they turn red, water, and itch like a motherfucker.

But I’ve recently realised another disadvantage of liking cats:

I suspect I’ve had it for some time – years, maybe. But I never realised it until now.

I first started to suspect something a couple of months ago, when I was at a party. I was standing in a small kitchen with a group of people, who were talking and drinking, and possibly eating. But although I was holding a beer, and possibly food, and maybe had my mouth open, I was doing none of those things.

Instead, I was watching a cat.

It was on the floor, eating, drinking, talking or whatever. My friend got my attention, looking slightly exasperated, and pointed out that I had been saying something – trying – to say something, for quite some time, but was clearly incapable of doing so with a cat in the room.

I can’t really remember how I responded to this accusation, but after subsequent events now suspect it was with something like:

‘What? Don’t be ridi… awww… come here. Come here! Aww… Does it like cheese? Can you pass me some cheese?’

I forgot about my friend’s comment for a few months. Maybe because I was drunk by the end of the night, or had encountered another cat. But last friday I went to one of those civilised things adults occasionally stage – a dinner party – and this was where I truly learned about the nature of this debilitating condition.

Six friends sit in a room, making noises that might be interpreted as conversation.

Me: ‘Did they have all the pyrotechnics again?’

Friend B: ‘Yeah, so much fire! The flamethrower thing nearly burned my face off.’

Miss-Matic, joining the conversation: ‘Who was supporting?’

Friend B: ‘Wasn’t it… Oh… Erm… We got there late and missed most of the other bands.’

Friend A: ‘You’ve seen them before, have you?’

Friend B: ‘Do you want another beer?’

Conversation resumes as normal. Drinks are served, places are taken at the table, food enters faces.

Friend C: ‘…I love his status updates! He loves himself!’

Friend A: ‘Is he the one who keeps posing with his cameraphone?’

Miss-Matic: ‘Yeah. He moves a bit of hair slightly to the left and thinks it deserves to go on Facebook.’

Miss-Matic: ‘Yes you have. You just don’t remember anyone. Ever.’

Miss-Matic: ‘Friend C was talking to you.’

Friend B flaps her hands at the black and white cat, and it runs away.

There comes a knock at the door, and Friend A goes to answer it. He is knocked to the floor as three masked men rush inside with baseball bats. A furious battle ensues. Soon the intruders have the upper hand, and only I stand between them and the drugs. I mean, gold.

Miss-Matic: ‘I’ll just kill these bad guys myself, shall I?’

She snaps the last of their necks, and lets the body slump to the floor. I stare, open-mouthed, at the corpses.

Miss-Matic shrugs as she opens another beer.

‘It was easy. They were too busy staring at that bloody cat.’ 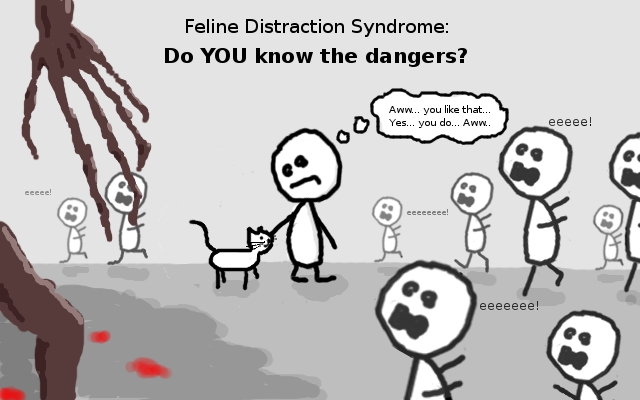