I don’t like spiders. Nobody likes spiders. Let’s not kid outselves about this. Nobody.

Those freaks who keep tarantulas in tanks? They don’t like spiders. They just want to know where that bastard is at all times.

When they get it out of the tank and let it crawl up their arm? They don’t like that. They’re not stupid. They’re just trying to get it used to their scent, so it doesn’t call over its buddies to have a face-eating party the following evening.

And as for arachnologists – they’re just following Sun Tzu’s maxim – ‘Know your enemy’.

All of these people are just as scared of spiders as you and I. Yes, you and I. I said let’s not kid ourselves.

But why are spiders so scary? Is it because three psychopathic escaped-criminals and a pirate, all armed with pointy objects and an affection for the look of your backside, STILL have less legs than one house-spider minding its own business above a doorway?

Is it because the most skin-crawling urban legends are always ones about spiders exploding out of harmless objects and crawling into places you might be about to go? Like your bed, the toilet, your underpants drawer or significant-other?

Or is it that you hate spiders because you quite liked Spiderman as a kid AND SPIDERS ARE ABSOLUTELY NOTHING LIKE SPIDERMAN?

But whatever the reason we hate spiders, we can be sure that they hate us too.

Every so often in my grey and dreary life, a spider will come along and brighten my day with a lightening-bolt of fiery adrenaline. This happened to me last night – the encounter was fairly typical and I did manage to survive, which leads me to conclude that my method of dealing with this kind of situation is fairly robust.

Thus I will now outline my coping-mechanism for you, in the hope that I can inspire the next generation of fearless spider-copers:

In this manner, I have coped with a number of my arachnid foes, and think I am steadily developing a reputation amongst them.

I look forward to the day when I become legend among the eight-legged folk; part-myth, part unholy reality. They will shudder as they barricade their webs shut at night. They’ll look nervously over their shoulders and obsessively check corners and spaces above doors. They’ll scare their innocent offspring into good behaviour with disturbing tales – tales of a figure that looms out of the night and emits a sound far more terrifying than any banshee’s wail:

The cry of Ash-Matic, summoning his girlfriend. 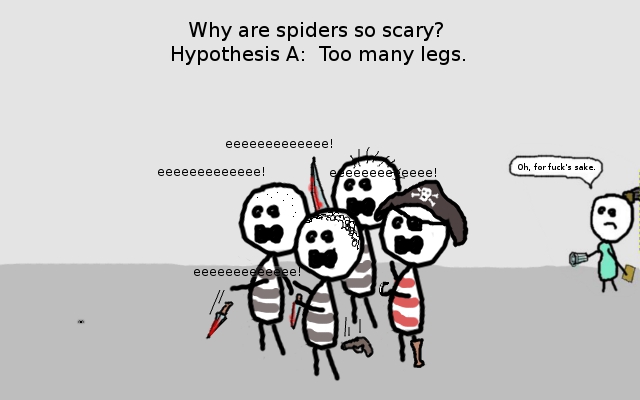 I am participating in the Dude Write Starting Lineup this week. Check it out!
Tweet