Ash-Matic Does Things In Bed

Many of the best things in life happen in bed. Like sleeping, and dreaming, and having breakfast in bed. If you have a special person in your life, you can jump up and down on the bed with them, or kick each other out of the bed and laugh and stop them getting back in, or steal the duvet and pretend you’re asleep and have a really good grip when you’re asleep, so they can’t steal it back. Things like that.

I can’t think of many bad things that happen in bed. I had nightmares once, but they were all kinda cool.

The fact that everything that happens in bed is awesome has led me to an epiphany. You can make things you wouldn’t normally do in bed BETTER, by doing them in bed.

For example. Last year, I had an awesome laptop that did awesome things, with an engine made of Ubuntu. It was pretty cool, and we got on well, although it did try to burn my thighs off whenever it could. One day it stopped working. Fortunately, I was able to use the lovely Miss-Matic’s ugly-ass laptop to Google for ways to take my own apart and fix it.

Sure, I could have done this on the kitchen table. The kitchen is mostly clean. It’s bright and well-lit; there’s plenty of access to running water, and occasionally food.

I took apart that motherfucker IN BED.

I was warm. I was comfy. It was fun chasing the tiny little screws all over the place every time I moved my legs. The hard drive only fell on the floor once.

It was a BETTER EXPERIENCE.

The story actually has a sad ending though, for those of you that are interested. The laptop didn’t make it. I kinda knew it wouldn’t, from the results of my searches, but I took it apart anyway. Well, all except for that one important screw right at the bottom that got threaded and held everything else together. I hated that fucking screw. I bet it was that screw that broke my laptop in the first place.

Taking the thing apart didn’t help, so I put it back together (except for the screws I’d lost, but they didn’t seem too important), and it still didn’t work, so I buried it in the garden and bought a new laptop – this one – which was cheap and tries to kill me less often and has an engine of Windows. Sometimes I still miss Lappy though.

Anyway, what else have I done in bed? Exercise is fun – I do star-jumps, but lying down. I’ve read a book in bed before, and I think everyone should try that. It might seem dull at first, but it gets quite good towards the end. Watching TV in bed always feels quite exotic, and so does woodwork – when I was a teenager I made a bird-table in bed, and the birds loved it.

So there are many things that can be done in bed, and each of them is better than when they are not done in bed. In particular, I like to eat things in bed. Not only is this the best way to eat things, and a generally good way to spend time, but Miss-Matic and I get tertiary-enjoyment from accusing each other of being the one who made the crumbs she’s lying on.

The best things to eat in bed are sugary doughnuts from a paper bag. Then come the general categories of things-you-hold (eg. ice-cream), things-on-toast (like butter on toast), things-in-a-bowl (bowl of skittles, soup, etc), things-eaten-with-one-utensil (eg. curry, sausages), then things-eaten-with-two-utensils (Sunday roast, Full English, etc). All of these things are good to eat in bed, and you will have a more enjoyable time doing so than sitting in a boring posture on a boring chair at a boring table, or alternatively on a boring sofa.

Beds just make everything better. Think of the best things – the BEST things – and then think of doing them in bed:

Anyway, the list just goes on. I think I’ve provided enough evidence to support my argument, and therefore, I rest my case. 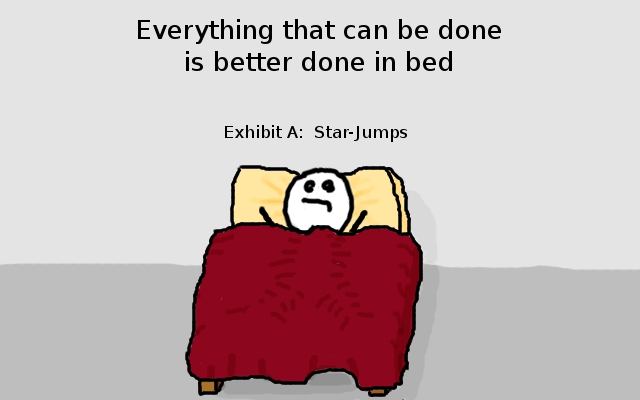