Self-service in super-markets is a wonderful thing. And when I say wonderful, I mean frustrating, error-prone, self-defeating, and shit. Of all the pieces of technology that piss me off, only printers are worse than these fuck-wit self-service machines.

Last night I was in my local supermarket, wishing to purchase the following items:

Being a friend to the animals and trees and Earth and shit, I’d brought my own bag. The machine first asked me – ‘Do you have your own bag?’

Being a guy of reasonable intellect, I knew the answer, and answered in the affirmative. Nothing happened, so after a while I pressed the on-screen button that said, ‘Yes, I have my own bag’.

The machine then asked me to place my bag in the bagging area, and I did just that.
A light came on overhead. The machine declared that it was unable to verify the existence of my bag, and told me to wait for assistance.

Assistance came on the form of a weary-looking guy, whose thousand-aisle stare told me he looked forward to nothing more than finishing his shift and going home to die.
He typed in a code, swiped a thing, opened a panel and twisted a couple of wires together, and persuaded the machine that a) my bag was a bag, and b) that my bag existed.

Then he went away.
I started scanning my goods. First, the cider.

‘Hang on a half-hour,’ the machine said. ‘I have no computer-vision capabilities. How do I know you’re old enough to buy that shit?’ And it yelled for assistance, in a manner similar to a soldier screaming for a medic when his friend has accidentally ingested some of that very same cider.

The guy came back. He didn’t ask me for ID. He didn’t even bother to register the dense foliage of facial hair I hid behind. He just wanted to die. But he persuaded the machine that everything was okay.

Next came the Mongoose and the Cobra. Now I know what you’re thinking, o imaginary reader – that Ash-Matic is going to make some lame joke about there being no barcodes on Asiatic fauna. While this is very true, what happened next is no joke. The beers went through okay. Instead, the machine had a problem with the CAKE.

I waited a while. The magical assistance man was doing laps around the six self-service machines, most of which were freaking out about being asked to do their jobs, flashing their lights like some kind of robot disco.

As far as I understood it, the purpose of these machines was to save time for customers and staff for the supermarket, stealing our jobs and our women. While I stood there, trying to be patient, trying to keep the Mongoose and the Cobra apart, a couple shopping for a family-of-three sped past one of the manned check-out desks with TWO full trolleys. When the security guard told them to go back and pay for their goods, they did, and I was still waiting.

But eventually, the assistance guy persuaded the machine that the cake a) was a cake, and b) existed, and I tried to pay.

I’m serious. I stood there like an idiot playing hot-potato, pushing this note into the machine, while it pushed it back out at me. It was like tug-o-war, only with pushing.

In the end, it got quite embarrasing. I felt like a counterfeiter, trying to pass off dodgy money. I even held my note up to the light to make sure it was real and I wasn’t trying to feed the machine a receipt for an embarrasing sex-aid or something.

I looked around for help, but the machine assistance man had had enough, and was walking into a photo booth with a handgun. I got there in time to pull it out of his mouth, and I took it back and shot that self-service machine right in the fucking face. Then I pushed my money into the bullet-hole, gave it a final kick, took my purchases and left, stopping only to give the assistance guy his gun back.

I thought about keeping it, taking it home and using it on my printer, but after my supermarket experience I couldn’t do that to the poor guy. 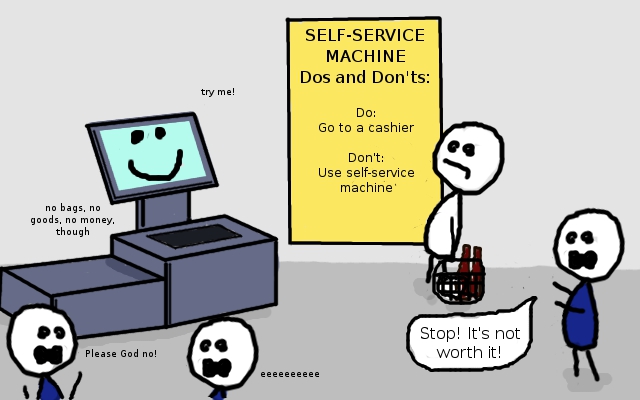