Girls get to do certain special magical things that only girls get to do. And on top of all that, they get to do everything guys get to do as well. They even get to pee standing-up. It’s true, I’ve seen it. I peed squatting once, and that was quite nice, but is beyond the scope of this post. I’m not sure why I mentioned it.

But of the many things girls get to do that guys don’t, fucking about with their hair is the one that makes me jealous.

I want to fuck around with my hair too. I want bobbles and scrunchies and those horse-shoe-shaped things that go over the top of your head like some kind of hair-band – and clips with googly-eyed spiders on for Hallowe’en, and chopsticks to go with your Chinese-style dress, and colours and glitter and whatever the fuck spray-on shampoo is made of – and to have my hair down or up depending on the occasion – and for other occasions have it half-down, or half-up, or mostly down with a bit that goes that way – or swooshed over this way with a bit that goes behind the ear, and long bits that go down there, while this bit comes up here and is braided into that bit with a French-knot made of swooshy sweeping bits that come over the top and weave into that part of the left pig-tail and the fuzzy bit from the plait over there. I want to do that. It’d be cool. I’d be pretty.

But no. Guys like me don’t get to do that.

‘Hold on a minute,‘ I hear you cry. ‘Why should anyone be held back by the backward heteronormative prejudices of decades past? This is the twenty-first century – do it. Be proud! Fuck what anybody else thinks.‘

Yes. Your impassioned cries move me deeply, but I’m afraid from where you’re sitting you can’t hear my genes giggling and guffawing at the very idea, rolling around and holding their sides until their glee turns to confusion because they’ve laughed so much they can’t even remember their tiny four-letter alphabet. Little bastards.

No, guys like me get to fuck around with their facial hair instead.

So I’m going to grow a beard. A beard so big woodland creatures will come and live in it.

I’m going to have squirrels jumping from hair to hair under my chin. Owls will glide silent and deadly across my wooded jowls at night. Bears will fish for salmon in the streams of my tears whenever I see a particularly sexy bouffant.

It’s going to be so big that news reporters will annouce the deforestation of an area the size of Wales each time I slip when shaving, and doomsday theorists will write blogs and make YouTube videos about the day when Nibiru strikes my face and destroys my beard and we all die of oxygen deprivation.

It’s going to be fucking awesome, and it’s going to start a trend and a new standard of beauty, and every morning I’m going to wake up and Google for blogs written by girls whining because their genes won’t let them grow such a fucking awesome beard, and I’ll laugh maniacally and leave belligerent and offensive comments, and feel fucking great.

I’ve been growing this thing for ages, and I haven’t even got a harvest mouse yet. 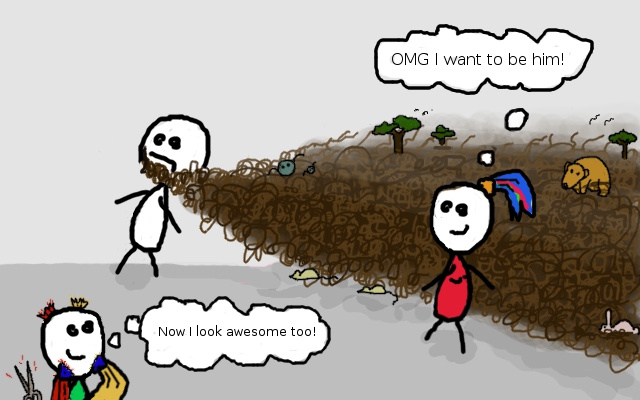