I imagine these people call themselves dentistophiles. They’re the kind of person who likes hands in their mouth, and being told to open wider seventeen times consecutively.

Others don’t like it so much. These are the dentistohaters. They don’t like hands in their mouths, and have a terrible fear that on the seventeenth time the dentist will shriek, ‘Too far! Too far! Oh God! Please, God, no!’

Personally, I’m ambivalent about being the subject of dentistry. Maybe this is because my teeth are okay and I don’t have much trouble with them. The last time I was at the dentist my teeth were described as beautiful, which was nice until the rest of my face was described as, ‘that stuff on the front of your head.’

But a trip to the dentist can get a little boring. I get drowsy and accidentally start suckling on my dentist’s fingers. It’s more embarrassing for her than it is for me – because I’m mostly asleep and like the taste of rubber gloves anyway. I think this form of narcolepsy might just be a natural consequence of lying down with my mouth in the yawn-position for so long.

I recently had to spend a couple of hours in this manner, while my thirty white horses were groomed and prodded and assessed for retirement at the glue factory. To prevent myself from embarrasing my dentist, I came up with three ways to entertain myself.

First I imagined I was a car engine.

But I do know that when a car is sick it goes to see a mechanic, so I pretended to be a very ill car, and that my dentist and her assistant were wearing grubby overalls and leaning over me to fix me with their giant mechanical instruments.*

MECHANIC A
‘Pass the samoflange, will you? Got a loose thermopile to tighten over here.’
SAMOFLANGE
Whoooooooooo!
MECHANIC B
‘Looks like there’s some kinda gunk coming out of the turboencabulator, I’ll just suck it up with the oxygen destroyer.’
OXYGEN DESTROYER
Slurpslurpslurpslurpslurp.
ME
‘Brrm! Brrm!’
MECHANIC A
‘There’s a stuck bolt behind the dilithium chamber. Hold this, I’m just gonna Bagger 288 it loose.’
BAGGER 288
EeeeeeeeeWOW–WOW–WOWeeeeeeeeeWOW–WOWeeeeeee…
*Names of tools used by mechanics may vary

And so on.
The best thing about this is that I genuinely felt I would get home faster afterward.

But next I imagined that I was an alien abductee.

Everyone wants to be abducted by aliens – I mean, it would be cool. So I imagined I was strapped down helpless to a strange semi-organic operating table, while these creepy-looking figures peered down at me. Their surgical masks hid horrific prehensile mouths, with forked tongues, teeth like knives, and spoons for lips.

The adjustable light looming over my face was their AI robot assistant, and it made helpful suggestions about what biological function my face might serve, and declared that analysis of my DNA only suggested a 12% success-rate if they used it in their cross-pollinating human-alien hybrid-breeding program.

Of course, I don’t speak alien, so they might have been talking about space-weather or the lottery results or something – but that was what I imagined. I was worried that the aliens might get a little too probe-y, but apparently they were only interested in the biology of my teeth, and I escaped with my dignity intact.

And afterwards, I would look at my phone and realise I was inexplicably missing a couple of hours. I wouldn’t remember where I’d been, or what I had done. Miss-Matic would get quite suspicious about this, and might suspect I was cheating or something, so I would explain it away as a trip to the dentist. I think she’d probably believe me, but in reality I’d have no idea where that missing time went, and would wake in the night, sweating, with half-remembered dreams of unnatural lights outside my bedroom window…

And then, I imagined that I was Creation.

I pictured myself as a world; a formerly unformed yet malleable mass, brought forth from the void, then fashioned into shape by the will of the Creators.

Now these two giant goddesses loomed over me, putting the finishing touches to their masterpiece with their mysterious tools* and vast knowledge.

‘This mountain range is too jaggedy,’ said one goddess. ‘How are the mortals supposed to use it as a ski-resort? Pass me the Bagger 288.’
‘EeeeeeeeeWOW–WOW–WOWeeeeeeeeeWOW–WOWeeeeeee…‘ said the Bagger 288.
‘Perfect,’ said the goddess. ‘Now we need to drain this lake. It shall be a fertile plain on which the mortals can develop agriculture.’
‘Hold on, I’ll use the oxygen destroyer on it,’ said the other goddess – the assistant-goddess who kept wandering away to stare out of the window whenever the main goddess’s back was turned.
‘Slurpslurpslurpslurpslurp,‘ said the oxygen destroyer, draining the lake before it got into the world’s throat and made him gag.
‘Perfect,’ the goddesses said in unison.
‘Now,’ said the main goddess. ‘Let us introduce the mortals to their world, with this unsterilised samoflange.’

And with that, the mortals crossed the bridge of the heavens and populated their world, and went skiing and developed agriculture and underwent asexual reproduction, and lived for many generations until the devastating mouthwash flood of 23:21 inundated the world and civilisation had to start over again.
*Names of tools used by deities may vary

And that, my friends, is the story of why the friendly bacteria in my mouth actually had souls for a short while.

Anyway, using these methods I successfully managed to prevent myself from falling asleep and suckling on my dentist’s gloved fingers. In fact, I only embarrassed her once, and that had more to do with the physiological effects of imagining sexy aliens than anything else. 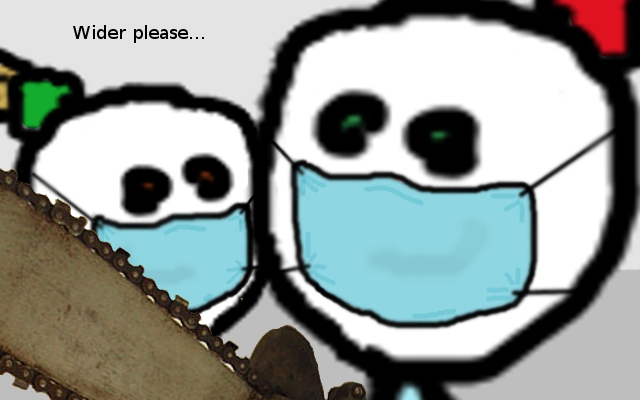